The German finance minister has welcomed the possible gas pipeline deal between Russia and Greece. But he expressed skepticism about an agreement on Greece's debt when EU finance ministers meet in Riga next week. 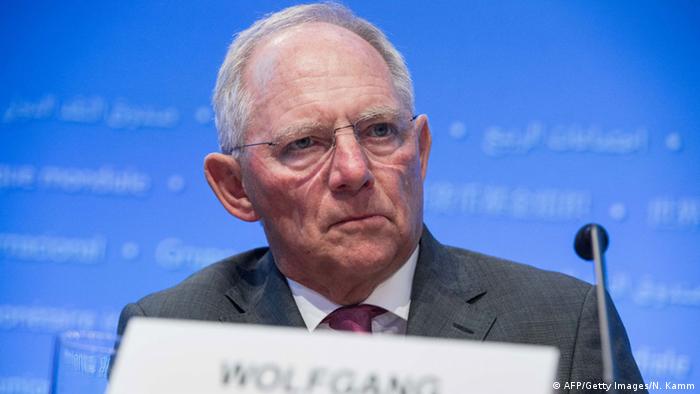 At the meeting of the International Monetary Fund (IMF) on Saturday, Schäuble said he saw international support for the German position in the Greek debt crisis.

"We are even getting acknowledgment from the very top," he said, referring to President Barack Obama's recent call on Greece to move quickly with negotiations and reach an agreement with the EU.

In Washington, Schäuble welcomed the possible Greek deal with Russia, though he questioned whether it would satisfy the demands of Greece's international creditors, German news agency dpa reported.

"I'm happy for Greece, if that's the case," Schäuble said on Saturday in Washington.

But at the same time, he expressed skepticism that any quick agreement will be reached in Riga next Friday. "I'm not certain there will be anything new next week," he said.

A Russian deal would 'turn the page'

News magazine Der Spiegel reported that the gas agreement with Russia could be signed on Tuesday.

Greek Prime Minister Alexis Tsipras and Energy Minister Panagiotis Lafazanis are believed to have come to an agreement with Russian President Vladimir Putin when they traveled to Moscow at the beginning of the month.

The proposed pipeline, which has not been approved by the European Union, could deliver Russian gas via Turkey and Greece to Europe.

A senior Greek official said inking the deal could "turn the page" for Greece.

US urges Greece to reach agreement

At the IMF's twice-yearly meeting in Washington, the United States on Saturday called on the Greek government to reach a prompt agreement in bailout talks.

"We urge the authorities to quickly and fully commit to technical negotiations with their international partners," US Treasury Secretary Jack Lew said. "Not reaching agreement would create immediate hardship for Greece, and uncertainties for Europe and the global economy more broadly."