Moscow is prepared to pay billions to Athens in exchange for a gas pipeline deal, according to German and Greek media. The deal would have the potential to turn around Greece's economic crisis, one observer has said. 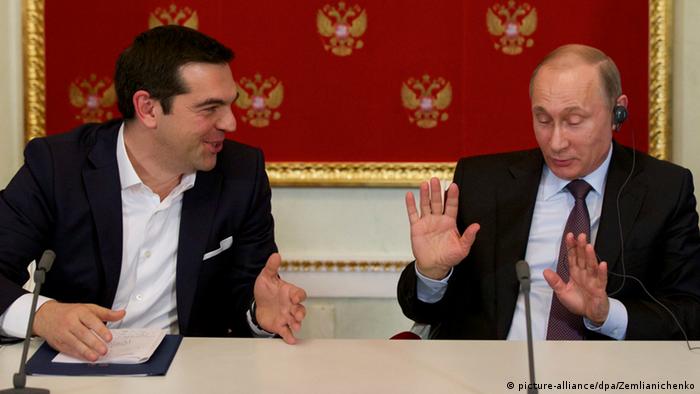 A potential agreement for a new Russian gas pipeline to be run through Greece could be worth 3 to 5 billion euros for the Athens government, German news site Spiegel Online reported Saturday, citing an anonymous Syriza party official.

"It could turn the tide for Greece," the official was quoted as saying, referring to Athens' bid to stave off creditors and avoid defaulting on loan repayments.

The Spiegel Online article reported that the agreement is expected to be signed between the two countries on Tuesday.

Greek Prime Minister Alexis Tsipras (pictured above, left, with President Putin) and Energy Minister Panagiotis Lafazanis are believed to have come to an agreement with Russian President Vladimir Putin when they traveled to Moscow at the beginning of the month.

However, Moscow's stance on the deal seems uncertain, after Kremlin's spokesman denied any such agreement had been made.

"Naturally the question of energy cooperation was raised...but Russia did not promise financial help because no one asked for it," Peskov told the radio station.

The proposed pipeline, which has not been approved by the European Union, could deliver Russian gas via Turkey and Greece to Europe. Though some observers doubt the pipeline will be built on time, or even at all, others predict it could be operational by 2019.

The Greek government was looking to Moscow and Beijing for financing worth a total of 15 billion euros, the Greek weeklies "Agora" and "Karfi" reported on Saturday, quoting government sources.

Meanwhile, Greece and its international creditors were expected to meet in Paris to discuss Athens' debt bailout program and reforms it must undertake to secure much needed funds.

"The Brussels group is meeting this weekend as of tomorrow afternoon," European Commission spokesperson Mina Andreeva told a media conference on Friday.

The Brussels group consists of Greece, the European Union, the European Central Bank and the International Monetary Fund. The European Stability Mechanism, which is responsible for issuing bonds and other debt instruments on financial markets in order to raise capital to aid member states, will also part-take in the weekend talks.

For "logistical reasons," the meeting will take place in Paris, not Brussels as was previously planned, an unnamed European source told the AFP news agency.

The weekend talks come ahead of an unofficial meeting in the Latvian capital of Riga on April 24, where Andreeva said finance ministers of the 19-country eurozone will have the chance "to take stock of progress."

Greece is hopeful the final part of its bailout funding, worth 7.2 billion euros ($7.8 billion), will mean Athens avoids bankruptcy and is able to repay debts to the IMF and European Central Bank.

German Finance Minister Wolfgang Schäuble, however, has said he does not expect a quick agreement to be reached. Among Greece's biggest creditors, Berlin has long called on Athens to institute austerity measures and other changes before providing more money to the cash-strapped nation.

"There is nothing new," Schäuble said Friday ahead of the spring meeting of the International Monetary Fund. "And I'm not certain there will be anything new next week in Riga."

The US administration has urged Greece to move quickly with negotiations and reach an agreement with the EU on terms for its bailout. A failure could lead to a crisis in the world economy. (17.04.2015)

Greek Finance Minister Yanis Varoufakis has rejected both an exit from the eurozone and an agreement on its debt with unreachable economic targets. Meanwhile, the IMF refused a delay in Greek debt repayments. (16.04.2015)