Saudi FM: Assad has no place in Syria's future

Syria's President Assad is part of the problem, not the solution, Saudi Foreign Minister al-Jubeir said during a Moscow visit. Riyadh's top diplomat ruled out any coalition between Saudi Arabia and Assad's regime. 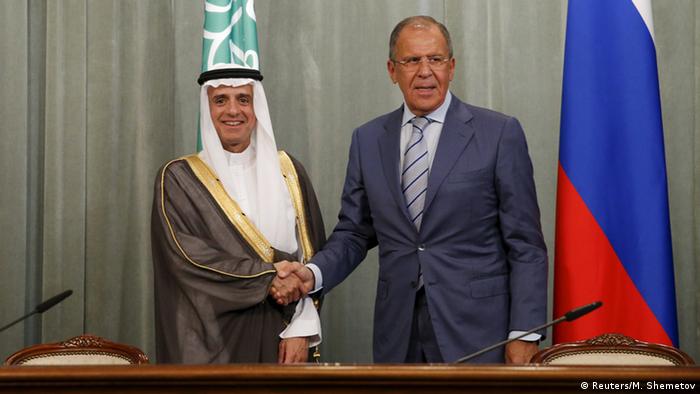 While Russia's Lavrov urged an alliance of Syria and several other Middle Eastern countries against the "Islamic State" militants, his Saudi counterpart Adel al-Jubeir rejected the idea of Riyadh's forces fighting alongside Assad's troops.

"When it comes to the coalition, presumably a coalition including Saudi Arabia and the Syrian regime, I believe that it should be ruled out. It's not part of our plans," al-Jubeir said.

Al-Jubeir also stressed that Syrian president Assad had no place in Syria's future.

Moscow has been a strong supporter of the Syrian president, and has recently launched the idea of coordinating Iraqi and Syrian armies, Kurdish forces and some armed Syrian opposition groups to boost the anti-IS efforts. The Kremlin had also called for cooperation from Saudi Arabia and Turkey.

On Tuesday, Lavrov pointed out that "Bashar al-Assad does not threat any of the neighboring countries," while the "IS" terror group is "drawing some maps from Spain to Pakistan."

"That is why we all need to take into account the scale of the threats," Lavrov added.

Despite the conflicting viewpoints on Assad, both diplomats agreed to encourage the Syrian opposition groups to cooperate in the search for a peaceful solution.

The Saudi foreign minister also announced that Riyadh is interested in buying Russian weapons, including the long-range Iskander missile systems.

"There have been several visits of Saudi military delegations to Russia during the last two months, the contacts have been intensified, discussing the types of weapons to be included into an upcoming military contract with Russia. I am confident that such contract will be signed soon," Al-Jubeir told the Russian Interfax news agency.