Saudi Arabia to let women into sports stadiums in 2018

Women in Saudi Arabia will be allowed to enter sports areas for the first time starting next year, officials have announced. The landmark move is the latest step towards social reforms in the ultra-conservative kingdom. 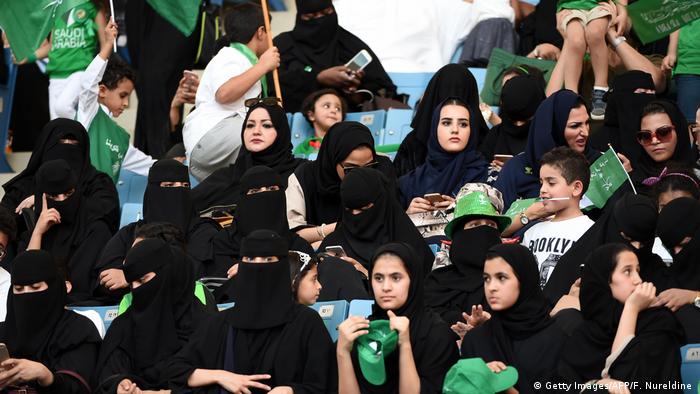 Saudi women were allowed to enter a stadium in Riyadh for the first time last month, but only to attend the country's national day celebrations

In a surprise move on Sunday, sports authorities in Saudi Arabia announced that women will be able to attend sporting events in stadiums starting in 2018.

The country's General Sports Authority announced the move on Twitter, writing that three stadiums in the cities of Riyadh, Jeddah and Damman are being prepped "to accommodate families" next year.

The authority added that restaurants, cafes and monitor screens would be set up inside the stadiums.

"Sports stadiums in Saudi Arabia to open their doors to welcome women in 2018," wrote Princess Reema Bandar bint Al-Saud, the Vice President for Women's Affairs of the General Sports Authority, on Twitter.

Frequently criticized for its strict restrictions on women, Saudi Arabia has long barred women from entering sports arenas due to strict rules on segregating the sexes in public.

Sunday's landmark announcement is in line with Crown Prince Mohammed bin Salman's recent reform drive, with the ultra-conservative kingdom showing signs of relaxing some of its restrictions on women.

His "Vision 2030" plan for social and economic reforms seeks primarily to wean Saudi Arabia off of its dependence on oil exports, but also aims to boost female employment.

Last week, the prince promised the kingdom will return to "what we were before — a country of moderate Islam that is tolerant of all religions and to the world."

The decision to allow women into sports arenas follows a July reform by the education ministry letting girls take part in sports at state schools.

It also comes on the heels of a historic royal decree last month that said women in Saudi Arabia would be allowed to drive.

Still, under Saudi Arabia's current guardianship system, a male family member — typically the father, husband or brother — must grant permission for women to be able to travel, study or do other activities.

Women's rights in the Islamic world

Women will soon be allowed to drive in Saudi Arabia, but what about other fundamental rights? We take a look at the lamentable state of women's rights in the Islamic kingdom and other countries across the region. (27.09.2017)