One of the explosive-laden drones fired at Saudi Arabia struck an oil terminal, resulting in a fire. Yemen's Houthi rebels have recently mounted increasing attacks on the kingdom. 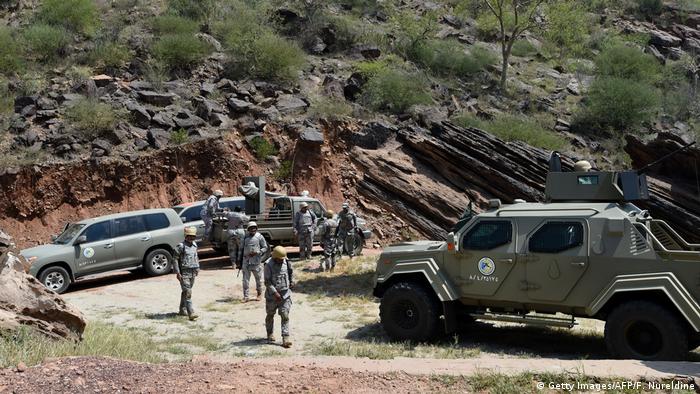 Saudi border guards patrol along the Yemen border in the al-Khubah area in the southern Jizan.

A fire broke out at an oil terminal in southern Saudi Arabia after it was hit by a projectile on Thursday, the kingdom's energy ministry said.

"A projectile attack on a petroleum products distribution terminal in Jizan... resulted in a fire in one of the terminal's tanks," the ministry said in a statement published by the Saudi Press Agency.

There were no casualties in the attack, it added.

The ministry did not mention who was behind the strike, which came on the eve of the sixth anniversary of the Saudi-led military invention in Yemen.

Yemen's Houthi rebels have recently stepped up drone and missile attacks on Saudi Arabia, particularly its energy installations. They have also launched a ground offensive to seize Yemen's gas-rich city of Marib.

The Riyadh-led coalition responded with airstrikes on Houthi military bases.

Thursday's attack comes days after Saudi Arabia presented a new peace initiative to the Houthis to end the war in Yemen, including a nationwide ceasefire under the supervision of the UN, and the reopening of air and sea links.

The Houthis, however, said the offer did not appear to go far enough to lift a blockade.

Yemen has been mired in conflict since Riyadh led a military coalition into the country in March 2015 to prop up the internationally recognized government after they were ousted from power by the Houthi rebels.

The rebels have seized the capital Sanaa, and large swaths of northwestern Yemen.

The conflict is widely seen in the region as a proxy war between Saudi Arabia and Iran. The Houthis have denied being backed by Tehran, saying they are fighting a corrupt system and foreign aggression.

US President Biden halts support for Saudi strikes on Yemen

The White House says it will push for a peaceful end to the six-year conflict, which has left more than 100,000 people dead and sparked a humanitarian crisis.