The UN said Hodeida is "one airstrike away from an unstoppable" cholera epidemic. The port city through which most food and supplies enter Yemen is under attack by the Saudi-led coalition fighting Houthi rebels. 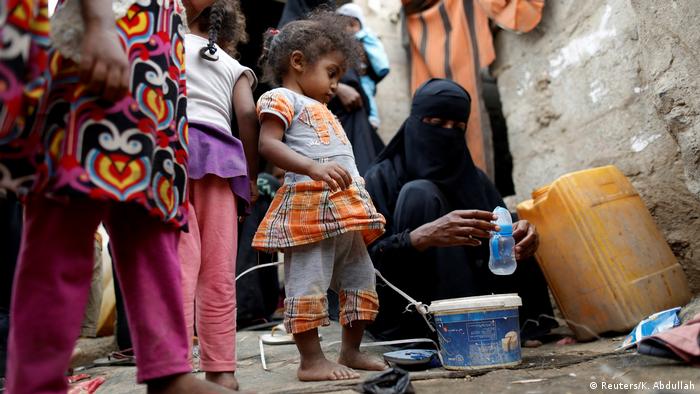 Airstrikes carried out in recent days by the Saudi-led coalition fighting Houthi rebels in Yemen struck facilities providing most of the water to the crucial port city of Hodeida, the UN said Sunday.

Backed by Saudi airpower, in recent weeks Emirati forces, government troops and irregular militia have been battling Houthi rebels in control of the Red Sea port city, home to 600,000 people.

The port is the main entry point for food, fuel and humanitarian supplies in Yemen, where 22 million people are in need of humanitarian assistance and more than 8 million face starvation.

Since earlier this year, Hodeida has been under a near total coalition blockade over what it says is the port's use as a gateway for Iranian weaponry to the Houthis.  Iran and the Houthis deny this.

The UN and aid agencies have warned that a coalition assault on the city could exacerbate what is already "the world's worst humanitarian crisis." 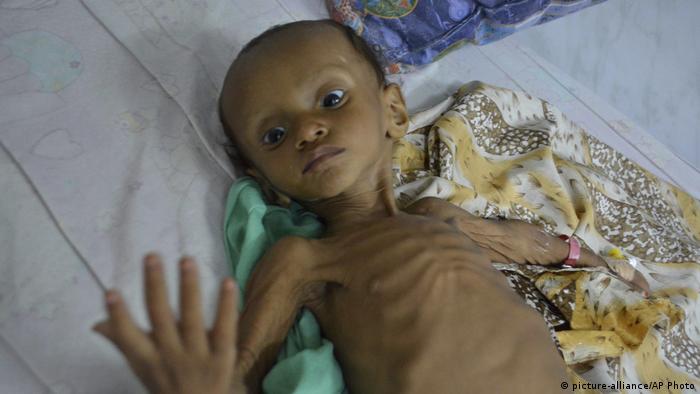 Twenty-five percent of children in Hodeida suffer from acute malnutrition, according to the UN

After a brief lull in fighting this month to allow the UN to mediate over Hodeida, the coalition relaunched an offensive in and around the port earlier this week.

The United Arab Emirates reportedly turned down a Houthi offer to hand over operation of the port to the UN, demanding instead that rebel fighters completely leave the city.

The UN humanitarian coordinator said that Saudi airstrikes carried out in the renewed offensive struck near health centers in Hodeida and "hit and damaged" a sanitation and water station in Zabid, south of the city.

The water station "supplies the majority of the water" to Hodeida, Lise Grande said Sunday in as statement.

Hodeida city and governorate are one of the epicenters of a cholera outbreak that spread across the country last year, leading to more than one million suspected cases of the deadly water-borne disease.

"Damage to sanitation, water and health facilities jeopardizes everything that we are trying to do…We could be one airstrike away from an unstoppable epidemic," Grande said.

Human rights groups have repeatedly accused the Houthis and Saudi-led coalition of war crimes during the war, which has killed more than 10,000 people.

Read more: US bids to revive 'Arab NATO' alliance as part of measures against Iran

The Houthis seized the capital Sanaa and large swaths of the country including Hodeida in 2014, sending the internationally recognized government of President Abd-Rabbu Mansour Hadi into exile.

A Saudi-led coalition of Sunni Muslim states intervened in 2015 to restore Hadi, retaking the southern city of Aden and some other areas.

However, the frontlines of the conflict have since largely stalled.

Meanwhile, Houthis have increasingly sought to challenge the coalition by launching ballistic missiles at Saudi Arabia and the United Arab Emirates, nearly all of which have been shot down by missile defense systems.

In another escalation this month, Saudi Arabia announced it had temporarily suspended oil shipments through the Bab al-Mandab Strait after a Houthi missile attack on an Aramco oil vessel.

On Sunday, the coalitions said it had conducted numerous airstrikes against ballistic missile launch sites in Saada, the northern Yemeni heartland of the Shiite Houthis.

The conflict in Yemen is viewed as largely a proxy war between Sunni Gulf Arab states and their rival Shiite Iran, which has provided support to the Shiite Houthis.

However, the conflict between the Houthis as a religious-political movement and Yemeni central government dates back to the 1990s.

Fierce fighting in the Red Sea port city has displaced 5,200 families, UN spokesman Stephane Dujarric has said. The Saudi-led coalition wants to force Yemen's Houthi rebels out of an area already on the brink of famine. (18.06.2018)