Fierce fighting in the Red Sea port city has displaced 5,200 families, UN spokesman Stephane Dujarric has said. The Saudi-led coalition wants to force Yemen's Houthi rebels out of an area already on the brink of famine. 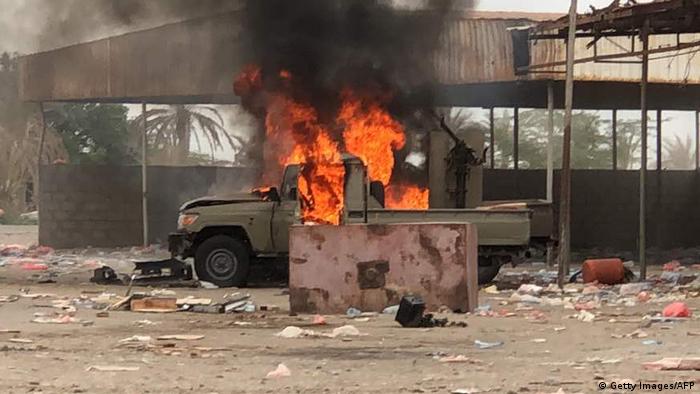 Nearly 26,000 people, or 5,200 families, have fled the conflict in Yemen's port city of Hodeida since last week, when fighters aligned to the Saudi-led coalition began an offensive to drive out the Iran-backed Houthi rebels.

United Nations spokesman Stephane Dujarric disclosed the figures on Monday, adding that he expects the number of displaced to rise in the coming days.

"About 5,200 families have fled the fighting to seek safety within their own districts or in other districts in Hodeida," he said, also noting that "fierce fighting has continued in Hodeida today."

Troops from the United Arab Emirates (UAE), along with irregular and loyalist forces in Yemen, have intensified their ground operation around the city, backed by coalition warplanes that focused their aerial bombardment on Houthi positions near Hodeida airport.

Houthi forces have, meanwhile, blocked roads to the airport, they said.

UN envoy Martin Griffiths remained in the Yemeni capital, Sanaa, to try to persuade the Houthis to withdraw from the city and place the port, which is a key entry point for commercial goods and aid, under UN supervision.

Dujarric said Griffiths was due to brief the UN Security Council later on Monday from Sanaa about his progress. He has extended his stay in the capital until Tuesday.

The UN and aid agencies are concerned that the fighting in Hodeida could cripple deliveries of food and other humanitarian aidthrough the city's port to millions of people who are on the brink of famine.

Some 70 percent of Yemen's food enters via the port, as well as the bulk of aid and fuel supplies.

The Saudi-led coalition intervened in Yemen's war in 2015 after Houthi rebels drove the internationally recognized government into exile.

Around 10,000 people have been killed, and three quarters of the country's nearly 28 million population relies on aid. Millions more are on the brink of starvation.

The conflict is widely seen as a proxy war between Saudi Arabia and Iran that has compounded instability across the Middle East.

The Houthis, who are backed by Tehran, rule the most populous areas of Yemen, and say their revolt is against corruption and foreign invasion.

The exiled Yemeni government said the attack will "cut off the hands of Iran, which has long drowned Yemen in weapons that shed precious Yemeni blood." But a regional expert told DW the humanitarian crisis could worsen. (13.06.2018)

A coalition of mostly Gulf countries led by Saudi Arabia has launched an attack to recapture a Yemeni port city from Houthi rebels, who receive backing from Iran. The journalist and activist Afrah Nasser fears the worst. (13.06.2018)