Covering a war is never easy, but in Yemen local journalists are being displaced internally and externally as a result of the ongoing conflict. As Gouri Sharma reports, hundreds of journalists have left out of fear. 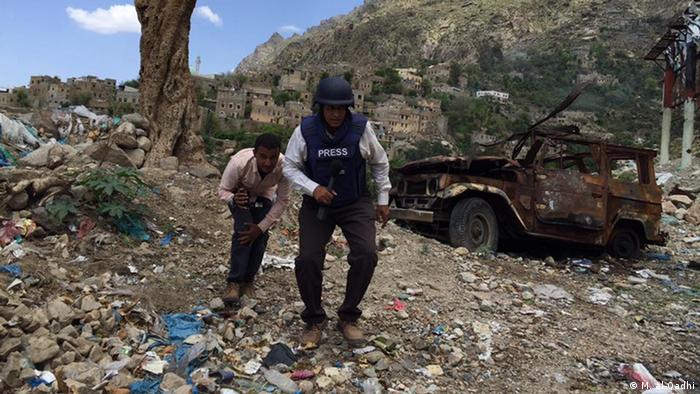 Mohammed al-Qadhi is lucky if he sees his family more than once a year. For the past three years, the war reporter has been living apart from his wife and four children, forced to flee the family home in the capital Sana'a as Saudi-led airstrikes hit the city. Today, as he tries to cover the war from the coastal city of Taiz, the 44-year old admits he isn't sure how much longer he will be able to continue working.

"So far I have been very resilient but I don't know how much longer I will be able to endure the situation. There are a lot of security concerns and a lot of psychological, mental and emotional pressures. It isn't easy to spend a long time in a city that is being destroyed and where the security situation is very chaotic. You can be killed anytime," al-Qadhi, who covers the war for foreign media outlets, told DW.

But his story isn't unique. As a new report shows, he is just one of hundreds of Yemeni journalists who have been displaced by the ongoing war in Yemen. In just three years, the war between the Houthis, a Shiite rebel group, and a coalition led by neighboring Saudi Arabia has not only pushed journalists from their homes, but forced many to stop working.

According to the report, which was published by the Yemen-based Studies & Economic Media Center (SEMC), "Yemeni journalists face the biggest wave of displacement in modern Yemeni history. Killings, kidnappings and various forms of abuse have forced journalists to search for less unsafe areas. While many journalists took the radical decision of giving up their profession altogether and keeping away for fear of prosecution and detention, Yemen saw large-scale forced displacement of journalists abroad. This sad, indeed tragic reality constitutes a severe blow to the profession in Yemen. In such a harsh environment, Yemeni journalists are restricted to arrest, death or plunging into the unknown."

Journalists — 'the most dangerous fighters in the field'

Research for the report was carried out between 2015 and the beginning of this year. While a large section of Yemeni journalists are excluded from the report due to difficulties reaching them, around 700 journalists — 89 women and 637 men — have been included. Of the overall figure, 30 percent of journalists have been internally displaced, while an alarming 70 percent have been forced out of their home country altogether. Egypt is the first choice for exiled reporters, followed by Saudi Arabia and then Turkey. 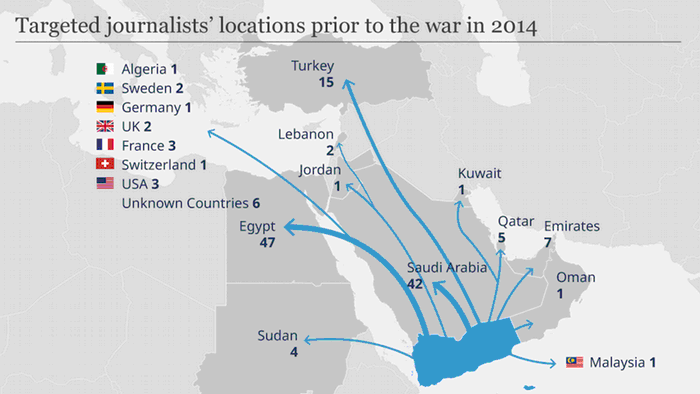 Internally, the majority of journalists fled the capital Sana'a, with many relocating to Aden in the east or Taiz.

Journalists say that the climate has become too dangerous for them to work in freely. Reporters have been among those killed in the ongoing Saudi-led airstrikes, while the Houthis, who control large parts of the country including the capital and parts of Taiz, have been accused of creating a culture of fear and intimidation, amid regular reports of kidnappings, office raids and threats.

"The environment for journalists in Yemen is so dangerous — there is no safe place in the country for them to work in. 30 journalists have been killed since 2015, three of them during the last two months alone. Except for a few organizations, this problem is ignored by the international press organizations," Mustafa Nasr, the chairman of SEMC, told DW.

Al-Qadhi says the overall climate is one of fear. "There are so many journalists who have fled to other cities because they fear for their lives. In Taiz I have been kidnapped and beaten up by pro-government forces and had an incitement campaign issued against me. It's is not a safe place, but at least I can work here."

The situation means that those who have remained have been pushed out of the profession completely. Ali Al-Raimi spent nearly 30 years as a sports reporter for one of the largest media outlets, Al-Thawra Newspaper. After the war broke out, he wasn't paid a salary for nearly two years. He had no choice but to stop working, and today, the father-of-one washes cars on the street where his newspaper used to be, earning around $50 (€43) a month.

It was this climate that forced Samia Al-Agbhri, 37, to move to Egypt three years ago. She used to work at a newspaper linked to the Yemeni socialist party in Sana'a, covering issues on corruption and human rights. "Before the war, Sana'a had a diverse media landscape, we were allowed to criticize the state and our institutions. But when the Houthis took over in 2015, the first thing they did was take control of the media. Its leader even called journalists 'the most dangerous fighters in the field.' Sana'a soon became a big prison — with raids, arrests and prosecutions of many journalists. I used to love my job. Now I feel helpless and frustrated," she told DW.

As the war rages on and the humanitarian situation for the country's 25-million plus population continues to deteriorate, Yemeni journalists say the media industry's future looks bleak.

Read more: Yemen conflict all but ignored by the West

Most of all Yemeni journalists are concerned that in the absence of professional journalism during times of war, it's the stories of the innocent population and their suffering those outside the country won't hear.

"This violation against journalists has meant that humanitarian and economic stories are missing in the media. Crucially, Yemeni citizens can't speak about their plight," said Nasr.

With Yemen's political and humanitarian situation growing increasingly fragile, DW speaks to people inside the country about what life is like in the midst of the war. (22.01.2018)