Samsung and South Korea: What next after Lee′s bribery conviction? | Asia | An in-depth look at news from across the continent | DW | 19.01.2021 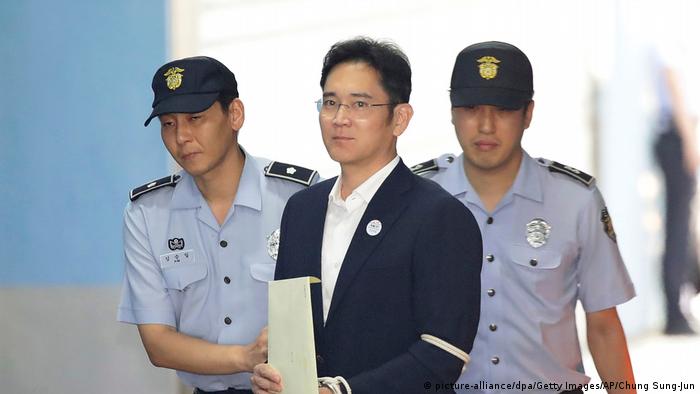 Lee's Samsung group is at the center of South Korea's economy

Both sides of South Korea's political divide were surprised by Monday's decision to put Lee Jae-yong, the de-facto head of the Samsung Group, behind bars again for his role in a 2016 bribery scandal that ousted a former president and exposed a widescale culture of corruption.

Lee had been released in early 2018 after serving a year on charges he paid bribes to disgraced former President Park Guen-hye. In 2019, South Korea's top court ordered a retrial. Monday's ruling revived the sentence to 2½ years and Lee will now go back to prison for 18 months.

Sending the heir of South Korea's most powerful conglomerate back to jail could indicate a shift in how the country deals with corruption. However, there was a lot of pushback against the verdict from commerce and industry.

In the days leading up to the judgment, various groups had been essentially lobbying the court to find a favorable outcome for Lee.

South Korea's Chamber of Commerce and Industry asked for leniency, arguing that Samsung's weight and role in society should be considered.

Civic groups, however, argued that the usual penalty for such corporate crimes — a suspended prison sentence, which essentially amounts to probation — must be abandoned.

Experts on both sides have suggested the verdict will enhance at least the semblance of transparency.

"This case tells us that no one is above the law, even if it's the Samsung owner."

The bribery charges are related to Lee offering 8.6 billion won ($7 million, €6.4 billion) in bribes, including horses, to the daughter of a confidante of former President Parkto win government support for the controversial merger of two Samsung affiliates as a key step toward his succession.

Lee was first convicted and sentenced in 2017, but was released on appeal early in 2018.

Former President Park is already serving a 22-year sentence for her role in the case and other crimes.

As news of the Samsung verdict spread, the market did not react favorably. The group's flagship, Samsung Electronics, on Monday dropped nearly 3.5%, and South Korea's market index also fell sharply.

Concern has risen that Samsung's ability to make strategic moves will be dramatically impaired as it is unclear who will take over the reigns.

"Samsung has emergency plans A, B, and C. They will manage it. But when the CEO is not functional, they're less likely to make aggressive new investments," said Lee Jae-seung, a professor of international studies at Korea University.

Samsung also has dozens of affiliates and hundreds of small- and medium-sized suppliers depend on its success.

"It's not just one company, it also has symbolic value," Korea University's Lee told DW.

"His arrest will have almost no impact on the South Korean economy, this has happened many times before," Hong Jun-pyo from the Hyundai Research Institute in Seoul told DW.

"The chaebol CEOs or owners may feel uncomfortable, but I don't think that discomfort will impact their business decisions."

Lee's bribery case is not the first time a Samsung leader has been found guilty of corruption.

He was given a 3-year suspended sentence and ordered to pay a $100 million fine. The elder Lee was later pardoned by former President Lee Myung-bak, who ended up himself serving a 17-year sentence for corruption.

Lee Kun-hee has been widely credited for leading the Samsung Group to become the corporate behemoth and electronics giant it is today. He died in October 2020 after spending five years in a coma.

The power of the 'Chaebols'

The behavior of chaebols and the tales of political payoffs are both legendary and mythic, replete with stories of midnight runs involving millions of dollars of cash stashed in apple boxes and delivered to the presidential office.

Sociologist Andrew Kim told DW that Lee's conviction is an  "exceptional case," arguing that, "the chaebols' hold on the South Korean economy and society will never decline."

In 2014, SK Group Chairman Chey Tae-won was found guilty of embezzling $40 million from affiliates. Chey, the chairman of South Korea's third-largest chaebol, was pardoned in 2015.

In 2018, Chey founded the Chey Institute for Advanced Studies, and last December, he was named vice president of the Olympic Council of Asia, the continent's top sporting governing body.

What next for Lee?

The Samsung scion may face a more difficult path to redemption as more legal troubles loom.

Along with Monday's conviction, Lee was also indicted in 2020for manipulating the stock price of a Samsung affiliate during that process. This caused widespread losses for investors, which included the country's national pension service.

Still, there may be some faint silver lining for the 52-year-old Lee even as he heads to prison.

South Korean President Moon Jae-in is in the last year of his presidency, and top politicians are looking to position themselves for the next election.

President Moon has said it's too close to their sentencing to consider pardoning the former leaders. However, observers say it would be hard to imagine freeing the former South Korean presidents while leaving the Samsung chief behind bars.

This may perhaps provide the wealthiest prisoner in the world a glimmer of hope.