The prison sentence could severely complicate his succession at the consumer electronics giant. Lee Jae-yong's conviction originally dates back to 2017 and pertains to a bribe to an associate of the former president. 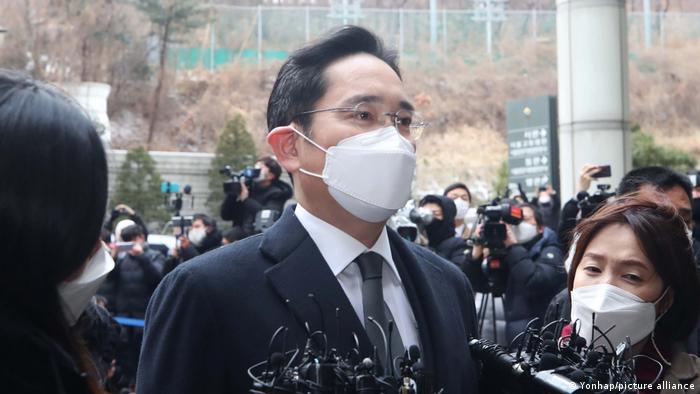 Billionaire Samsung Electronics vice president Lee Jae-yong was sentenced to 2 1/2 years in prison for bribery and embezzlement on Monday at the Seoul High Court.

His conviction is connected to the corruption scandal that brought down former President Park Guen-hye.

Lee "actively provided bribes and implicitly asked the president to use her power to help his smooth succession" at Samsung, the Seoul court said in its verdict.

The city's highest court found Lee guilty of bribery, embezzlement and concealment of criminal proceeds worth about 8.6 billion won ($7.8 million, €6.5 million), and said the independent compliance committee Samsung set up in 2020 must still become fully effective.

Monday's verdict could prove the culmination of a retrial in a long-running legal battle for Lee.

Lee was sentenced in 2017 for offering millions of dollars in bribes to Park and her
longtime friend Choi Soon-sil.

His initial conviction to five years  was later reduced and suspended at appeal  after he denied wrongdoing, and he was released after serving a year.

Park and Choi are serving prison terms of 22 years and 18 years, respectively.

South Korea's Supreme Court sent the case back to Seoul High Court in 2019, saying that the amount of Lee's bribes had been undervalued. It said the money Samsung spent to purchase three racehorses used by Choi's equestrian daughter and to fund a winter sports foundation run by Choi's niece also should be counted as bribes.

Lee's lawyer, Lee In-jae, told reporters that the case "is the former president's abuse of power violating corporate freedom and property rights," adding: "Given that nature, the court's decision is regrettable."

The year Lee already served in detention is expected to count toward the sentence, leaving 18 months of his sentence to be served.

Monday's sentencing can be appealed to the Supreme Court within seven days, according to the judge, though it was not immediately clear if it would agree to take on the case for what would be a second time.

The reimposed custodial sentence could hamper the succession process at Samsung, after Lee's father Lee Kun-hee died in October. It may also deny the consumer electronics giant its most influential manager during the transition period, with Lee unable to take part in major decision making at Samsung Electronics for the time being.

Samsung heir Lee Jae-yong is accused of being involved in stock manipulation to advance his succession and gain control of the firm. A court ruled he should not be jailed during his trial.

Paraguay: President calls on cabinet to resign after protests over COVID response 1h ago