Esther Mujawayo-Keiner knows what trauma feels like. She lost most of her family in the 1994 genocide. Now she works in Germany as a trauma therapist for African refugees. Marie Sina met her in the city of Düsseldorf. 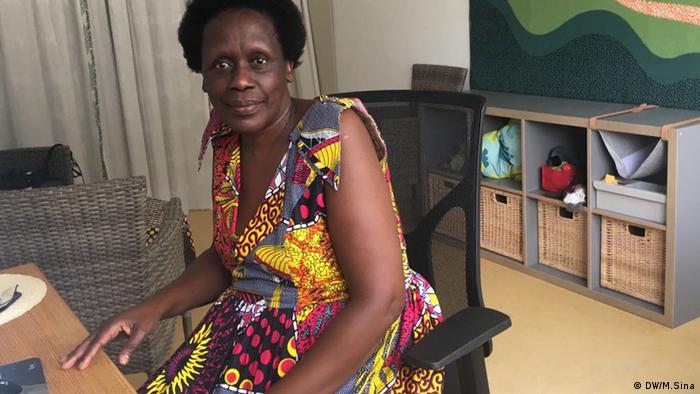 Esther Mujawayo-Keiner lost her husband, sister, parents, aunts and uncles in the 1994 Rwandan genocide. She and her three daughters survived almost through a miracle. She was on maternity leave when all of her Tutsi colleagues were murdered during a meeting. And in the night that her family’s hideout was discovered, the women were spared.

The genocide claimed the lives of some 800,000 Tutsis and moderate Hutus. When it was over, Esther felt as though she was going insane. She was no longer sleeping or eating and her memory was failing her.

Together with other female survivors, she founded AVEGA, a widows' association. "By creating AVEGA, we gave our lives new meaning. We learned to cry together and we learned to laugh again," Esther explained. The women realized that what they were feeling was not insanity but trauma. With this realization, their healing process began.

"Our motto was to become alive, alive again. And, slowly, slowly, we did." As Esther regained the ground under her feet, she decided to take a sabbatical year and train as a psychotherapist in the United Kingdom. She wanted to help other trauma survivors become alive again.

Putting horrific memories in the bin

In 1999 Esther moved to Germany with her daughters and her second husband. Since 2001, she has worked as a trauma therapist for African refugees at the Psychosocial Center for Refugees in Düsseldorf.

"When refugees come to me first, they are in a very bad condition. The traumata make it hard for them to even remember to find [the way] back to the center. Sometimes they do not come back for months because they have completely lost their concentration."

More than 400 refugees seek help at the center every year. Most of her patients are suffering from memories of their war-torn home countries, and from the dangerous journeys they had to make to get to Germany.

"I am currently working with one family who arrived in Europe by sea. Their children witnessed people falling off the overcrowded boat. Some passengers died on the journey, so the children were surrounded by dead bodies for days on end. Now, one of the little girls is haunted by nightmares of the boat ride. I gave her pen and paper during our first session and she drew a boat filled with dead bodies," Esther said, adding that she provides her patients with a place to empty their heads, to leave all their horrific memories in her dust bin.

The importance of community 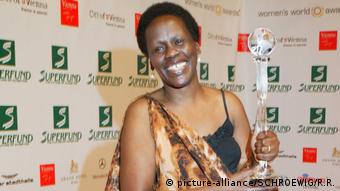 Esther Mujawayo-Keiner in Vienna at the Women's World Awards 2009, where she received the World Social Award

For Esther, her children's survival was what saved her. Her three daughters gave her a reason to continue and to rebuild their lives together. She sees the same sort of resilience in many of the female refugees at the center.

"Even though they have lost everything, they still keep their role as a mother, as the caretaker of the household. The women still have a strong sense of purpose, which makes it easier for them to start their lives here."

The empowering impact AVEGA had on her life after the genocide taught Esther the importance of community.

"I encourage the refugee women to go out and meet other refugees. Alone, you are just by yourself, but together you can be strong again," she said.

Two decades after the genocide, Esther sees Rwanda as a shining example of how to recuperate from tragedy.

"From the worst, most terrible experience, we managed to make something good, something beautiful."

Esther describes Rwanda as a mosaic, with people scattered from different groups coming together and working hard to make the country into what it is today. What worries her is that many of her patients do not have the same opportunity to take part in a rebuilding process.

She says that one of the most important aspects in healing is stability. The constant worry of not being granted asylum leaves many trapped in a state of fear.

"When you are constantly thinking you will be deported tomorrow, you cannot integrate, you cannot learn the language, you cannot start to live again," she said.

For Esther Mujawayo-Keiner, Rwanda's progress embodies post-traumatic growth. "There is a theory that says you can take your unfortunate history and use it to grow, to be even better."

Post-traumatic growth is something she sees in many of her patients.

"There is a boy who came to me when he was 16 years old. He was dissociating and he was thinking he was mad. He got triggered and panicked just from the sight of a train conductor. The uniform reminded him of the people who killed his family," she recalled.

Today, the former refugee is married, has two children and works at a bank in Düsseldorf. Sometimes, he gives Esther a lift to work in his new car. It is moments like these that convince her that "it is possible to become the man or the woman you used to be again, to become alive again."

Rwandan President Paul Kagame is poised to win his third term in office. A constitutional amendment allows him to stay in power until 2034. Some say he's a despot; others praise him for his accomplishments. (04.08.2017)

23 years after the genocide, Rwanda is seen as an example in the region. But behind its neatly restored image lurks the tragedy of children born of rape. The trauma for mother and child has yet to be properly addressed. (09.08.2017)