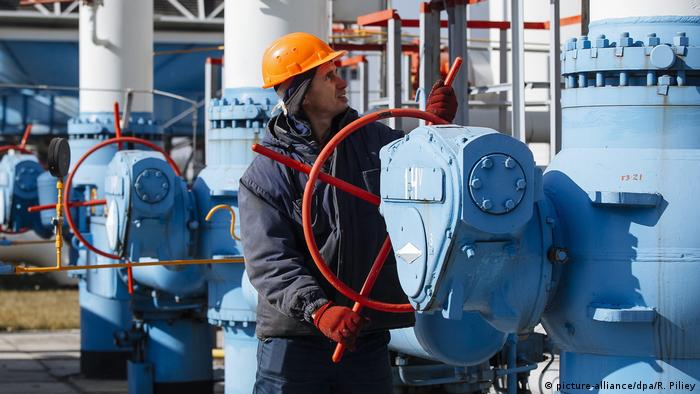 A worker turns a tap at the gas-compressor station in Mryn village, about 130 km from Kiev, Ukraine.

Russia and Ukraine have agreed to continue to send gas through Ukraine to Europe for a further five years.

The new deal, outlined by Moscow and Kyiv on Saturday, eases concerns over whether Europe could lose access to a large portion of Russian gas, which the region depends on to fuel industry and heating.

Russia sends roughly 40% of its gas deliveries destined for Europe through Ukraine.

The new five-year gas deal also includes the option to extend the agreement by an additional 10 years, according to the Ukrainian energy minister, Oleksiy Orzhel.

That figure is, however, lower than what Russia delivered to Europe through Ukraine in previous years.

Orzhel told reporters that the gas transmission tariff would be higher than under the terms of the existing contract, which expires at the end of this year.

Gazprom and Ukraine's Naftogaz had gone to an arbitration court in Stockholm in a number of disputes over gas prices and transit fees dating back to 2014.

Russian and Ukrainian officials expect to sign the contract before New Year's Day.

The current gas transit contract between the two ex-Soviet countries expires at the end of the year and ties between them have been strained since Moscow annexed Crimea in 2014 and supported a separatist insurgency in eastern Ukraine.

The agreement was outlined hours after US President Donald Trump approved sanctions on the Nord Stream 2 gas pipeline between Russia and Germany.

The US, along with some Eastern European countries, staunchly opposes the project, which will send natural gas over 1,200 kilometers (745 miles) from Russia to Germany via the Baltic Sea.

EU sanctions targeting Moscow's finance, energy and defense industries will stay in place until mid-2020. The decision comes after the leaders of Russia and Ukraine met in Paris to seek a solution to Ukraine conflict. (13.12.2019)

DHL's Ukrainian temps experience the dark side of Christmas