Russia′s creeping annexation of Abkhazia | World| Breaking news and perspectives from around the globe | DW | 15.10.2015

Abkhazia is seen as a "de facto independent" quasi-state on the Black Sea, a puffer between Russia and Georgia. But what does that mean exactly? A journey into a region in the shadows of the new East-West conflict. 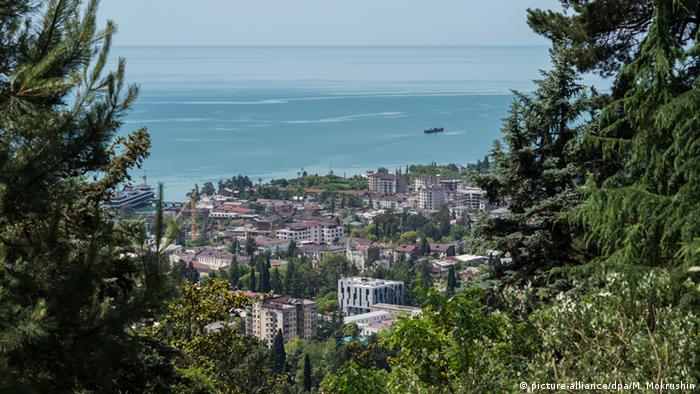 The offices of the Ministry of Foreign Affairs in the Abkhazian capital Sukhumi (above) look like offices anywhere else in the world. When Foreign Secretary Viacheslav Chirikba enters the office, the 56-year-old minister's staff jump up to greet him. Chirikba is a linguist, specialized in the languages of the Caucasus region. For a number of years he studied, taught and lived in Leiden in the Netherlands. Europe is not foreign to him and he says that Abkhazia is a European country.

Nonetheless, he draws a clear delimitation: Here the pro-Russia camp, there the West. "The Cold War is back - unfortunately." No one should kid themselves, says Chirikba during his interview with DW, at the same time he sums up Akhazia's position: Russia guarantees Abkhazia's security in the face of decidedly pro-Western Georgia, Russia gives money for economic reconstruction and subsidies to the national budget. Slightly irritated, he asks, "What's wrong with that?"

What might be wrong with Russia's policies in this case, is something that is discussed intensely in Abkhazia. More than a few people here fear that Russia's goal is a kind of creeping annexation, with the final objective of integrating Abkhazia into the Russian Federation.

Tengiz Jopua is critical of Moscow's influence. He is the chairman of "Ainar," a new political party derived from a think tank dealing with socio-economic themes and having the same name. Jopua also describes the situation similarly: Abkhazia wouldn't survive without Russia's military presence. But, at the same time, that gives Abkhazia less room to maneuver domestically. His demand that Abkhazia should "finally learn to swim on its own," will no doubt remain wishful thinking. 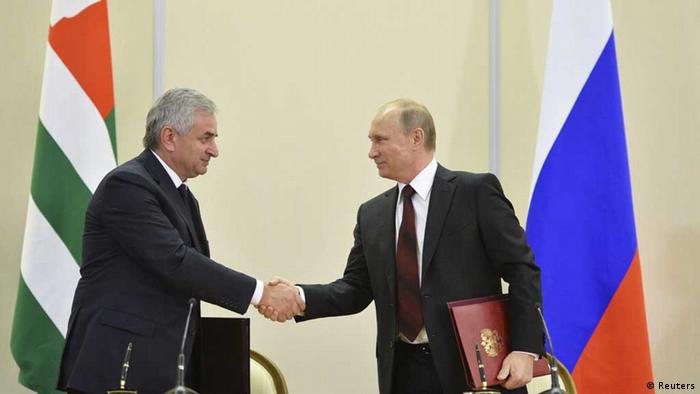 The Russian ruble is the official currency. Abkhazian residents can easily get Russian passports - which offer their only possibility to travel to Western countries. On the other hand, tourism in Abkhazia lives off of Russian vacationers. This year it is estimated that more than four million will come. And lastly, a "Strategic Partnership Agreement" between the Kremlin and Sukhumi guarantees Moscow far-reaching rights. Since the agreement was signed, Western observers have tended to view Abkhazia as a military protectorate of Moscow.

Tensions between the Abkhaz and the Russians

We wanted to see the situation ourselves, so in mid-September we took off from Moscow with a DW camera team to go film in Abkhazia. Hopes of getting permission to interview a Russian officer or film at a Russian garrison were dashed before we even left Moscow. When we arrived, John Gulariya, deputy administrator of the Gali District which is about an hour from the capitol Sukhumi, drove to a Russian barracks with us. It is right on the E 60, Abkhazia's main north-south traffic artery.

The Abkhazian official reported to the officer on guard, a major in the Russian army, and asked if we could film the barracks from the road. The major denied the request. Gulariya exclaimed that the road is Abkhazian property and that anyone who wants to film or shoot photos from it is allowed to do so.

The two proceed to get into a loud argument. Finally, the Russian major says: "How am I supposed to know who you are? You could be a friend of Saakashwili's for all I know." Indignant at being compared to the Georgian president, a man as hated in Abkhazia as he is in Russia, Gulariya poisonously retorted: "We don't need any Saakashwilis here, and no Hitlers either! Why are you talking to me like that, you, a representative of the glorious Russian army?" Nonetheless, we did not get permission to film. The major then threatened us and the Abkhaz official with serious consequences should we decide to ignore his orders.

Despite such tensions, most Abkhazians agree with Moscow's policy of building up their country as a bulwark against Georgia. Georgia still wants to join NATO. A mere 80 kilometers (50 miles) separate the southernmost Russian military base near the Inguri River border and the oil terminal at the port of Supsa in Georgia. The Russian bases are spruce new buildings, and atop each are red and white lacquered transmission masts outfitted with modern communications technology.

The demarcation line along the Inguri has been equipped with motion detectors and infrared sensors. This makes semi-legal border traffic between Georgia and Abkhazia all but impossible. Beyond that, Abkhazia has now implemented export duties on agricultural products, making it difficult for small farmers from the Gali District to export their fruits and hazelnuts to markets in Georgia.

Next we drove to the Iguri River with the municipal administrator of the village of Akhishka on our research trip. He wanted to show us some old smuggling routes, but a Russian border guard stepped out from behind a bush and stopped us. After disappearing with the administrator's ID, he returned a few minutes later, at which point he told us to turn around and leave - in terse military fashion. The Abkhazian official's objection that this is "his village" did not interest the Russian soldier.

The quest for recognition

Besides Russia, only Venezuela, Nicaragua and the Pacific island state of Nauru have recognized Abkhazia diplomatically. In Sukhumi, Foreign Minister Chirikba told us that he was currently negotiating with countries in Africa and South America about the initiation of diplomatic relations - all steps on the path to political normalcy in a sovereign country. Abkhazia, according to encyclopedia entries and articles, has "de facto independence." But that formulation does not accurately describe the reality on the ground.

Abkhazia's dilemma: no future without Russia

A presidential election is taking place in the breakaway Caucasian territory of Abkhazia. Although its pro-Russian spirit is waning, it remains dependent on Russian military and financial support. (23.08.2014)

Tiny Abkhazia lies within sight of the bright lights of Sochi and Russia. But hopes that the Games would bring money to this self-proclaimed republic were dashed as the border shut down. So whither Abkhazia now? (17.03.2014)