A Russian student's speech before the German parliament has triggered a heated debate in Russia. The teenager was blasted for expressing compassion for German prisoners in World War II. 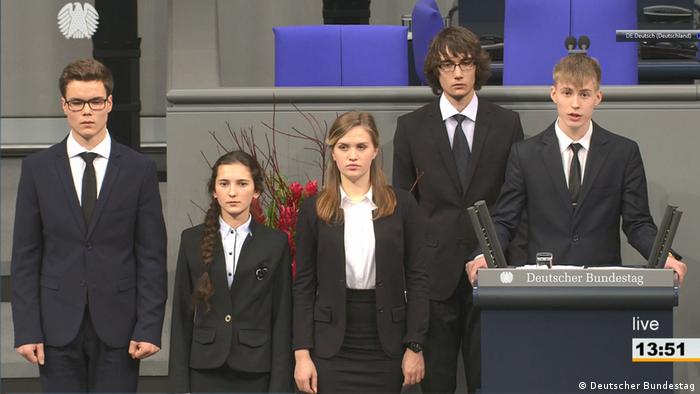 As far as state broadcaster Rossiya-1 was concerned, the top in Russia story on Monday came from Berlin.

It wasn't the fact that the German government's coalition talks had failed, but rather a Russian student who "triggered a true international scandal" when he spoke before Germany's parliament, the Bundestag, according to a Rossiya-1 political talk show.

Nikolai Desyatnichenko, a high school student from Novy Urengoy in Siberia, was clearly nervous when he addressed German lawmakers Sunday, at an event commemorating the National Day of Mourning. He and five other students — three from Germany, three from Russia — sat right behind German President Frank-Walter Steinmeier and many German cabinet ministers. The teenagers were set to present a joint project their schools in Kassel and Novy Urengoy had prepared — a study on the fates of military prisoners on both sides of World War II.

In his two-and-a-half minute speech, the 16-year-old spoke about a Wehrmacht soldier who was captured in the Battle of Stalingrad and later died in a prison camp. The fate of the German soldier touched him, the young student said. He explained how he'd visited a German military cemetery and was "very sad" when he saw the graves of innocent people who had died, many of whom had wanted to "live peacefully, and not wage war."

A Russian living in Germany published a live recording of the student's remarks, triggering an avalanche of indignation in Russia.

The dialogue grew especially heated on social media, with some people accusing Desyatnichenko of treason. The main allegation was that Desyatnichenko commiserated with a German soldier whose army had begun a war of aggression. The fact that Russia this month is commemorating the 75th anniversary of the Soviet counteroffensive in Stalingrad seemed to fuel emotions even more. 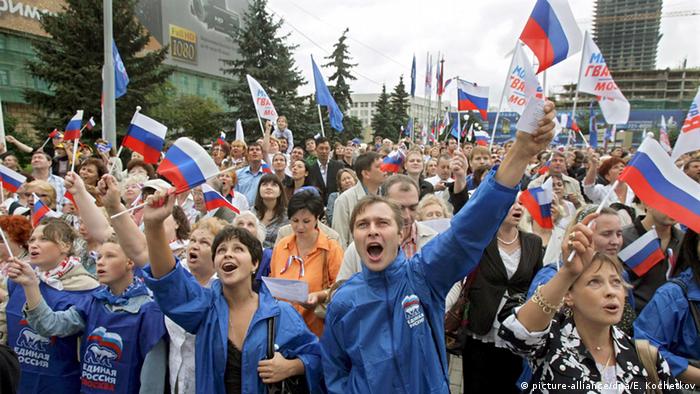 The case quickly took on political and legal dimensions. Lawmakers in a Russian local parliament asked prosecutors to examine whether this was a case of belittling Nazi crimes. The Novy Urengoy city administration called for an investigation at the boy's high school.

His mother published a letter of explanation in the Russian media, implying the speech was shortened by time constraints. Initially, she wrote, her son wanted to speak about his war veteran great-grandfather. In any case, she added, his main message was a desire for peace in the world. The high school told DW in a statement that the incident was a "misunderstanding in communication" because the speech was shortened.

Some politicians urged examining the private sponsors of the German-Russian commemoration project. "Who are these generous private sponsors?" Vladimir Zhirinovsky, leader of the right-wing populist LDPR, asked on Russian TV on Monday.

Finally, when it seemed the debate was spinning out of hand, the Kremlin stepped in.

"We believe it is wrong to accuse [Desyatnichenko] of evil intentions or Nazi propaganda," said President Vladimir Putin's press spokesman, Dmitry Peskov, adding that the uproar in a case that didn't warrant any reaction from the Kremlin was off-putting. Anna Kuznetsova, Putin's commissioner for human rights, also backed the young student, arguing that "agitation and debasement" don't further patriotism.

The "Great Patriotic War" — the Russian term for the Soviet conflict against Nazi Germany — is a central part of the country's culture of remembrance. Media outlets in Russia broadcast numerous programs and films about the war, and it has become a key foundation of patriotic education in schools.

"The issue of war, the historic commemoration and how it is presented in public are very important in Putin's Russia," said Moscow radio reporter and blogger Alexander Plushev.

Are Germans proud of their history?

At the Haus der Geschichte museum in Bonn, a young Iraqi learns about German history, in particular the years of the Nazi dictatorship. Hayder al-Maliki found that Germans can be ambivalent about their country's past. (26.03.2017)