Russian military on the move ahead of Ukraine talks in Minsk

One day before crucial talks in Minsk, Russia has launched a military maneuver on the Crimean Peninsula. Meanwhile there are reports of fresh fighting and casualties near Mariupol, Lugansk and Donetsk. 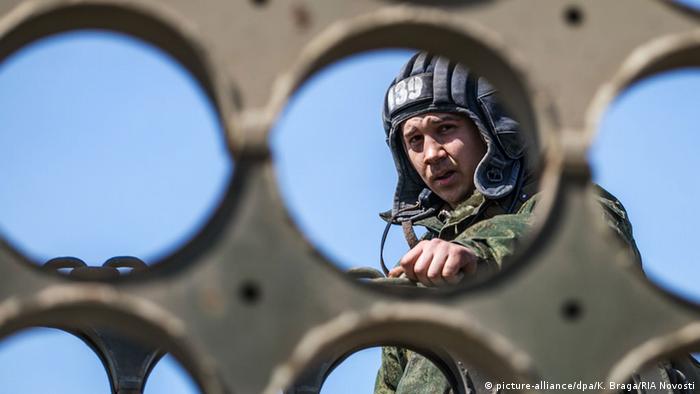 At the same time, a further 2,000 soldiers started large-scale exercises in southern Russia near the border with Ukraine in a show of military might ahead of the crisis talks.

Ukrainian President Petro Poroshenko, his Russian counterpart Vladimir Putin, along with European duo Angela Merkel and Francois Hollande are heading to the Belarusian capital in the hopes of reviving an earlier ceasefire that crumbled almost as soon as it was agreed upon.

As world leaders press for a diplomatic solution to the fighting between pro-Russian separatists and Ukrainian government forces in the east of the country, both sides claim to have made significant gains on the ground on Tuesday.

Ukrainian troops launched an offensive against the rebels in the port city of Mariupol, breaking through their defenses, according to Ukraine's National Security Council. Meanwhile, conflicting reports came out of the town of Debaltseve- with both the Ukrainian Defense Ministry and the separatists claiming on Tuesday that they were in control of the strategic rail hub and highway connection between the embattled cities of Donetsk and Luhansk.

Tuesday's fighting cost the lives of at least nine people, including two civilians. A further six civilians were killed when, according to regional police, rebel rocket fire hit the Ukrainian army's eastern headquarters in Kramatorsk, though the rebels denied the accusation.

Chancellor Merkel and President Obama don't agree on a crucial point when it comes to the ongoing Ukraine conflict, but continue to emphasize their unity, observes DW's Gero Schliess. (10.02.2015)

Chancellor Angela Merkel has again appealed for a diplomatic solution to the Ukraine conflict on a visit to Ottawa. Prime Minister Harper said he would welcome such a breakthrough, but questioned Russia's readiness. (10.02.2015)

Ukraine crisis: Are the British backing down?

The Iraq war, Middle East talks, Iran nuclear negotiations: the UK has always been a major player on the foreign policy stage. But on the Ukraine crisis, London seems content to leave things to Paris and Berlin. (09.02.2015)