Arkady Babchenko has spoken at a televised press conference, apologizing to friends and loved ones and thanking Ukraine's security services for saving his life. Authorities say his death was staged to thwart his murder. 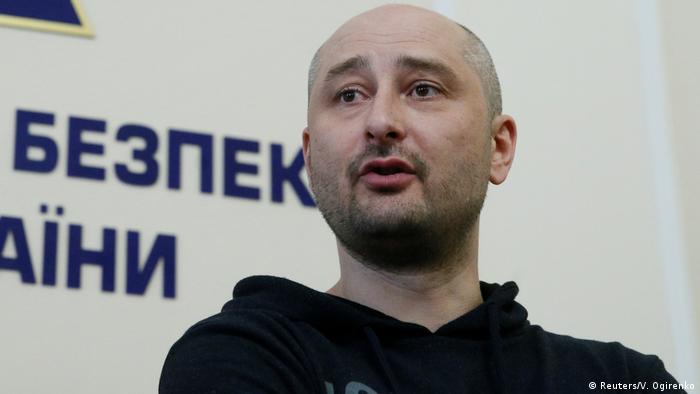 Russian journalist Arkady Babchenko, whose reported death was international news on Tuesday night, has appeared at a televised press conference.

The journalist thanked Ukraine's security services for saving his life, purportedly by faking his death in order to foil a genuine assassination attempt.

Babchenko appeared with representatives from Ukraine's security services and Ministry of Justice. Vasily Gritsak, the head of Ukraine's SBU security service, told reporters that the operation had been planned for two months. Gritsak claimed Russian intelligence agents had paid a Ukrainian man $40,000 (roughly €34,000) "to organize and carry out the killing of an exiled Russian journalist."

DW's Kyiv correspondent Nick Connolly reports Ukrainian authorities claim their own plan worked in that it exposed direct connections between Russian intelligence agents, the Ukrainian man who organized the assassination attempt and the gunman hired to carry it out. They say the gunman had worked with them to make the staging of Babchenko's death possible. Though they did not provide evidence to support their claims of direct links to Russia and reports that the Ukrainian man who received payment had planned to organize a number of further murders in Ukraine, they said that they would at a later date.

Russian Foreign Ministry spokeswoman Maria Zakharova said on Facebook: "That Babchenko is alive is great news. It's too bad that other cases aren't masquerades as well," adding, "It is obvious that there was a propagandistic effect in this story." 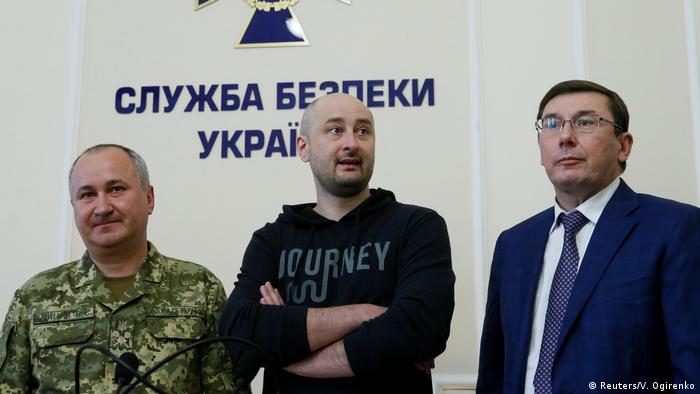 During the press conference, reporters were told that the staging of Babchenko's death had been coordinated by the journalist and Ukrainian police following serious death threats against him. Police officials said the operation was carried out in an attempt to lure out those behind the threats. They said that one arrest had been made so far.

Babchenko himself apologized for the pain the news of his death had caused, telling those present: "I have been forced to bury my friends and colleagues many times and I know the sickening feeling." His family was not informed of the plan either, leading him to add: "Special apologies to my wife, Olechka, there was no other option."

Ukrainian President Petro Poroshenko weighed in as well, tweeting: "Ukrainian law enforcement agencies are becoming stronger every day in countering Russian aggression. It is unlikely that Moscow will calm down -- I've given an order to provide Arkady and his family with protection."

The news was greeted with joy by Russian opposition politicians. Ilya Yashin, who knows Babchenko and was a close ally of slain politician Boris Nemtsov, spoke of the operation on Alexei Navalny's YouTube show, where he was appearing ahead of his bid to become the mayor of Moscow: "I don't want to comment on the operation in great detail. It really was difficult and dramatic," adding, "but now we can breathe a sigh of relief."

Leonid Slutsky, head of the Duma International Affairs Committee, said, "It is a shame that a Russian citizen became part of this horrible spectacle." He said "the orchestration of the death of Russian journalist Arkady Babchenko is a dirty and cynical provocation in the style of the Skripal case," referring to the case of Russian double-agent Sergei Skripal, who was poisoned in the UK on March 4.

The deputy speaker of the Duma, Igor Lebedev, summed up the incident saying: "It is worth reminding the whole world again: You can never trust Ukraine on anything."

Russia had previously commented, when Babchenko was thought dead, that Kyiv had become "a dangerous place for journalists" recently.

The organization Reporters Without Borders (RSF) harshly criticized the operation. RSF director Christophe Deloire said that although he was relieved that Babchenko was still alive, "it is regrettable and pathetic that the Ukrainian police have played with the truth, whatever their motive." He said the operation would "not help the cause of press freedom. All it takes is one case like this to cast doubt on all the other political assassinations," referring to the slayings of Kremlin-critical journalists in Ukraine.