A terrorism trial has caused outrage among activists in Russia, who claim the entire case was fabricated by the FSB agency. A military court issued long sentences for the alleged members of the leftist "Network" group. 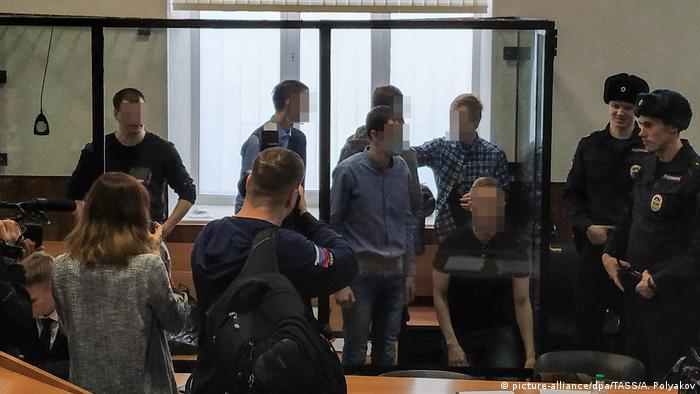 Russian authorities claim the defendants had plotted to overthrow the government. The investigators say the group illegally bought weapons and explosives, conducted drills, and were preparing terror attacks in 2018, when Russia held a presidential election and hosted the football World Cup. The investigation had been launched in 2017 by Russia's domestic intelligence agency, the FSB. Agents said they found two Makarov handguns and grenade parts during searches.

Two other defendants previously confessed to the charges and incriminated other "Network" members. Charges against one of them were dropped and the other was sentenced to 3.5 years in a penal colony.

However, government critics and reputable human rights activists have decried the case, saying it was fabricated by the FSB. They describe the defendants as anti-fascists.

'I told them whatever they wanted me to'

The seven defendants sentenced on Monday, aged 23 to 31, denied the charges. Several of them claim they were beaten and tortured with electrodes to extract a confession.

"They told me to take off my clothes, sit on the bench, they tied my hands with scotch tape and put on a blindfold," one of the defendants, Ilya Shakurskiy, was quoted as saying by the independent Novaya Gazeta newspaper.

"I was in my underwear, they put a sock in my mouth, and tied wires to my big toes. Someone asked, why do you lie to the FSB?" Shakurskiy said. "They turned on the electricity, they did it five times. I told them whatever they wanted me to."

Shakurskiy was sentenced to 16 years. 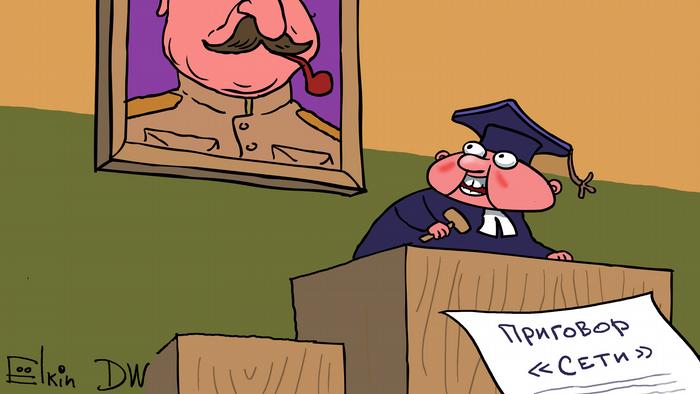 DW cartoonist Sergey Elkin gave his perspective on the case for our Russian department. The document reads simply 'The 'Network' verdict'

Russian activists also slammed the surprisingly lengthy sentences issued by the court against the seven remaining defendants on Monday.  The three-judge panel in the provincial town of Penza sentenced the men to terms ranging from six to 18 years in a penal colony.

He decried the "testimonies obtained under torture from very young people about a made-up terror organization."

The criticism was reinforced by Nikolai Svanidze, a member of Russia's Council for Civil Society and Human Rights, an official body which aims to assist the Russian president in guaranteeing human rights and freedoms.

"We have looked into those issues, there was torture and it was quite serious," Svanidze told the Interfax news agency on Monday. He also said that he did not understood these "terrible, enormous prison terms."

"The people involved in the investigation should be investigated themselves," he added.