Torture in Russia′s prisons becoming ′more sophisticated and brutal′ | Europe | News and current affairs from around the continent | DW | 13.09.2018

After a video surfaced showing Russian inmate Evgeny Makarov being brutally tortured by prison guards, his lawyer, Irina Biryukova, had to flee the country. She told DW that prisoner abuse remains widespread in Russia. 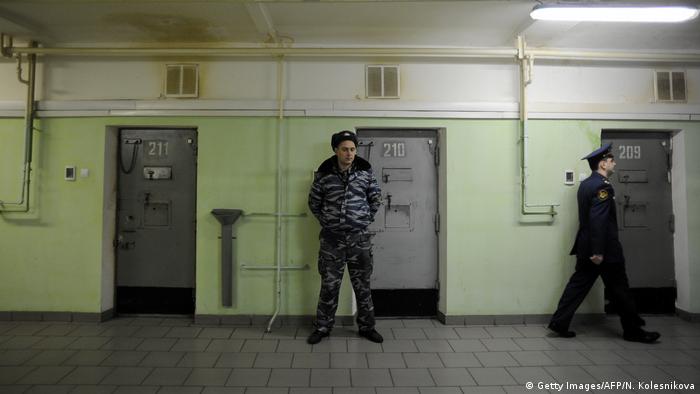 In July this year, the Novaya Gazeta newspaper released footage showing Evgeny Makarov being brutally tortured by a group of guards at the Yarslavl prison in Russia. The incident reportedly occurred in 2017. Irina Biryukova works for the Public Verdict Foundation and serves as Makarov's lawyer. Her organization has published the names of the 18 prison guards involved in the torture of Makarov. Thirteen guards are currently in pretrial custody.  Now, a second video with further evidence of torture inside a Russian jail has surfaced.

DW: You have been working as a lawyer for 13 years. Would you say that incidents of torture have increased in Russian jails?

Irina Biryukova: Yes, the situation has definitely become worse. I don't recall there ever being as many complaints about torture as now. Occasionally in the past there were cases where officers would abuse their power during arrests, or inadvertently use excessive force and break someone's arm. Ten years ago, however, the situation began growing worse and worse. In the past five years, the torture of inmates has become more sophisticated and brutal.

Reports claim that prisoners are even tortured while in pretrial custody. How serious is this issue?

Torture in pretrial custody is an even bigger issue than the torture of regular inmates. In pretrial custody, authorities use torture to force inmates to make confessions. In regular prisons, torture is applied to break individuals who oppose the system.

Why do you believe there has been an increase in this kind of treatment?

I think these things happen because people believe they won't be caught. Judging by the statements made by Yaroslavl prison guards they thought they'd go scot-free. DW sat down with Biruykova in Warsaw

The torture footage leaked to you was recorded using a guard's body camera. Why did he film the incident in the first place?

Prison staff told the court that inmates like Evgeny Makarov, who constantly complain about their treatment and demand their rights be respected, need to be "educated." One prison guard said: "We were very disgruntled because he was permanently complaining about the prison administration. He even called on the European Court of Human Rights." The guards provoked Evgeny. He's only 25 years old and very impulsive. They destroyed a letter by his mother in front of his eyes, filming how he began cursing at them. They then showed the footage to the prison director, who in turn agreed Evgeny should be subjected to "education measures."

That means the torture footage was recorded for the prison director?

So why was the video published?

I tried identifying the motive for that. I was given the following explanation: "First of all, it'll show us how you work. Secondly, we want you to help stop the perverse practice of prisoners being released on parole if they pay money. And we want the prison guards who beat Evgeny Makarov to be punished because this is simply unacceptable." Though not only Evgeny was beaten in jail.

You have asked the state to protect you and your client, who will be released in October. Is the state doing that?

It's not protecting me, but him. It sounds a bit odd, asking someone to be protected who is locked up in a jail where he was tortured. The prison director has been obliged to implement the state's protection measures. To him that means visiting Evgeny every day in his cell to check that he is doing alright. And Evgeny is now under constant video surveillance.

After the torture video was released, you left Russia. Now, you want to return. Does this mean you are no longer in danger?

I fear the threat will increase. After the second torture video was released it became clear that not just ordinary prison staff are involved in these things, but also prison officers on the regional level. More and more cases are coming to light. They are creating a certain momentum. We got everything rolling. People in our organization have different opinions. Some say I can return now because the case has been made public and because the main culprits are in jail. Others think it would be a good idea for me to stay in safety a while longer. But I will return soon, I hope.