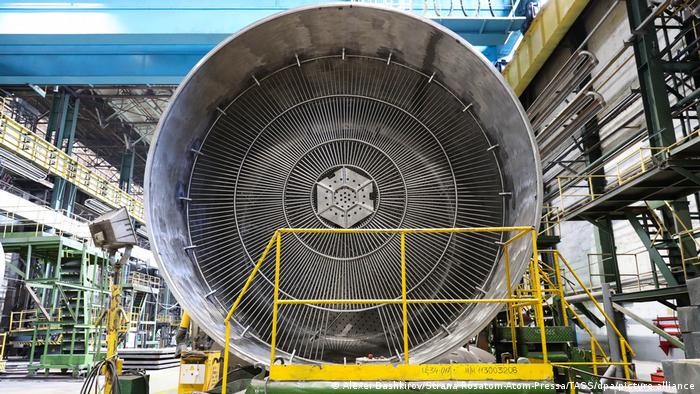 El-Dabaa plant is set to be built on the coast of the Mediterranean Sea, some 300 kilometers north-west from Cairo

Rosatom chief Alexey Likhachev and Egyptian Energy Minister Mohamed Shaker on Wednesday poured concrete into what will serve as the base for the plant, marking a "historic event" for Egypt, said Shaker.

Likhachev said that Egypt has now "joined the nuclear club."

The project, paid for with a loan from Russia, is expected to cost around $25 billion euros, according to the Egyptian media. It is planned to have four 1,200 megawatt reactors.

The statement did not specify when construction would end. In 2017, after el-Sissi and Putin signed the deal, Rosatom said the plant would be finished in either 2028 or 2029, but construction has already been delayed for several years.

According to the joint statement, the el-Dabaa plant is set to use pressurized water reactors, similar to those at Russia's Novovoronezh and Leningrad nuclear power plants.

Cairo first announced considering a nuclear plant at El-Dabaa in the 1980s, although the project was suspended after the 1986 Chernobyl disaster. But el-Sissi, who has launched multiple mega-projects since he took power in 2014, seemed determined to embark on the flagship nuclear initiative.

As the host of this year's UN climate summit COP27, Egypt is seeking to raise the share of its power generation capacity from renewable sources to 40% by 2030 and 42% by 2035.

"The plant will be the largest project of Russian-Egyptian cooperation since the Aswan High Dam," Likhachev said on Wednesday. He was referring to the 111-metre-high and 3.6-kilometer-wide dam harnessing the Nile river for hydropower and irrigation.

The Aswan High Dam, in southern Egypt, was built with Soviet support. It was a major project in the early 1950s of then-President Gamal Abdel Nasser, a key figure of the pan-Arabism ideology.

Since Russia invaded Ukraine, Egypt has not officially picked a side. Russian Foreign Minister Sergey Lavrov is heading to Cairo this weekend, where he is set to meet with the 22-member Arab League.

Still, el-Sissi has maintained close ties with the West.

Last month, the European Union turned to Egypt and its neighbor Israel in a bid to reduce to bloc's dependency on Russian natural gas.

In 2020, Egypt was one of the largest recipients of US military aid after Israel and Afghanistan, according to Statista.

A highway through the City of the Dead