Between Cairo and Suez, Egypt wants to build new capital

Plans are in the works for a brand new capital city not far from the current administrative seat. Gulf Arab allies have pledged billions in investments and central bank deposits for Egypt at an international summit. 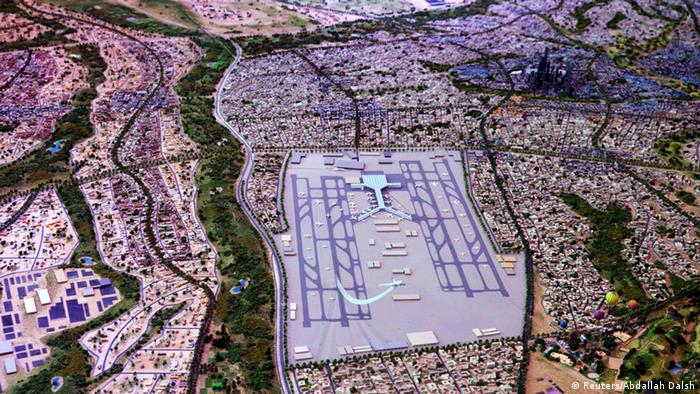 Housing Minister Mostafa Madbouly said Egypt would build an as-yet-unnamed administrative capital that would house 5 million people and provide 10 million jobs halfway between Cairo - currently home to 20 million people - and the Suez Canal. After building the 40-billion-euro city, which would draw its aesthetic inspiration from Cairo's late-19th and early-20th century British colonial districts, the government would relocate its buildings there, Madbouly told delegates at an investment conference in Sharm al-Sheikh.

Madbouly described a "sustainable city" to relieve urban crowding resulting from the expected doubling of Egypt's 88 million population over the next 40 years. Eventually, the new capital would expand to 700 square kilometers in size (270 square miles), much of it green spaces, linking up with the Suez Canal zone, Madbouly said, calling the project a source of "pride and inspiration" to young Egyptians.

The announcement came at the opening of a three-day sales pitch to neighbors and potential investors in the resort city of Sharm al-Sheikh attended by hundreds of business executives and world leaders. As the first phase of the ambitious program, Madbouly said, the government would expand the current outskirts of Cairo to the east, adding 105 kilometers (60 miles) of development.

"We are talking about a world capital," Madbouly said, adding that the city would have green streets "without any fast-moving cars," and 10,000 kilometers (6,000 miles) of roads and 200 kilometers of rail.

President Abdel Fattah al-Sissi has expressed optimism that the three-day conference will bolster both foreign investment and his international standing. US Secretary of State John Kerry arrived earlier on Friday to the Red Sea resort town of Sharm El-Sheikh, where hundreds of foreign dignitaries and businessmen will look into investing in the country after four years of tumult.

That number seemed within reach. Kuwait, Saudi Arabia and United Arab Emirates have offered $4 billion each. The UAE announced that it would deposit $2 billion of its pledge in the Egyptian central bank, while Saudi Arabia set aside $1 billion of its promised funds for the bank.

"We will work with you to absolutely secure the ambitious and important goals that you have laid out here today," Kerry said on Friday.