A Syrian war monitor has claimed Russian airstrikes in Syria have killed more than 18,000 people over the past three years. But Russia says the figure is actually closer to 85,000. 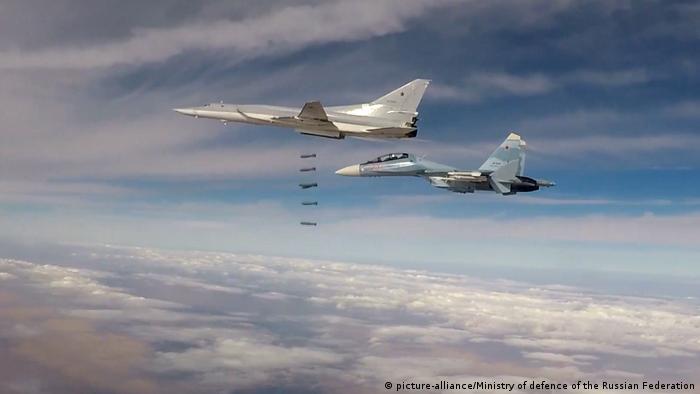 More than 18,000 people have been killed in Russian air strikes since Moscow started a bombing campaign in Syria exactly three years ago, a monitor said Sunday.

Russia's military intervention in support of the Syrian government on September 30, 2015 changed the course of the war, allowing President Bashar Assad's regime to retake large swaths of the country.

During those three years, Russian airstrikes have killed 18,096 people, according to the Syrian Observatory for Human Rights.

The West and rebel factions have accused Russian and Syrian warplanes of indiscriminate bombing and intentionally hitting hospitals, schools and markets.

The White Helmets, a Syrian rescue group, also put out a report on Sunday limited to Russian attacks its teams have responded to in opposition areas.

It said those Russian strikes had left 1,848 civilians dead, including 27 White Helmet volunteers.

Russia also has special forces and military police on the ground in Syria, where Iranian-backed forces have helped the Assad regime.

At the time of Russia's intervention, the Syrian regime controlled only a quarter of the country's territory compared to about two-thirds today.

In addition to Russia and Syrian warplanes, the US-led coalition against IS has been carrying out airstrikes in Syria since September 2014.

Last week, the Observatory said coalition airstrikes have killed more than 3,300 civilians since it intervened against IS.

The coalition has confirmed 1,059 civilian fatalities, including those in Iraq, where it has conducted airstrikes against IS since June 2014.

Airwars, a monitoring group, estimates that a minimum of between 6,575 to 9,968 non-combatants have been killed in Coalition action in Iraq and Syria from August 2014 to August 2018.

The Observatory says it determines whose planes carried out strikes according to type, location, flight patterns and munitions.

The rebel group Failaq al-Sham has begun withdrawing from a demilitarized zone in northern Syria. It is the first to do so under a Russian-Turkish deal aimed at averting a large-scale government offensive. (30.09.2018)

Syria's last major rebel stronghold of Idlib will be the focus of a summit in October, Chancellor Angela Merkel has said. Germany is take part in the summit alongside Russia, Turkey and France. (28.09.2018)

Hundreds of members of the Syrian Civil Defense aid organization have been evacuated from Syria. Its director told DW that the aid workers are in grave danger due to regime attacks. (24.07.2018)