The popular blogger, who had previously interviewed dissident Alexei Navalny, was hospitalized with facial lacerations and a possible brain injury. He was allegedly attacked by two unknown men in front of his home. 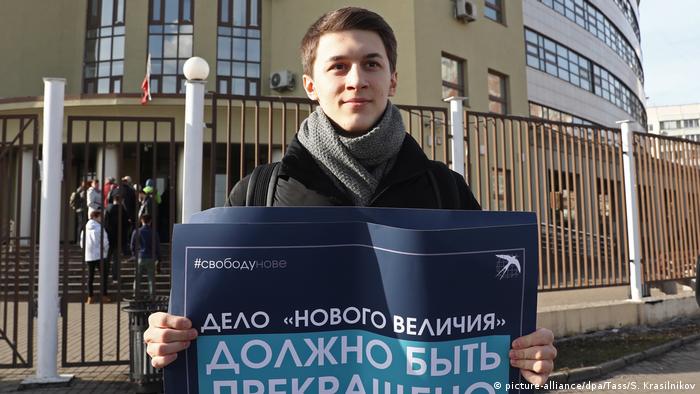 Kremlin critic and blogger Yegor Zhukov, 22, was seriously injured in an attack in Moscow, his spokesperson said Monday.

Zhukov, a well-known activist, was hospitalized with facial lacerations and a suspected brain injury. He has been working for the Ekho Moskvy (Echo of Moscow) station since he was banned by the state from having his own video channel online.

Zhukov previously interviewed Russian dissident Alexei Navalny, who is currently being treated at a Berlin hospital for suspected poisoning.

The activist's spokesman posted photographs of his injuries shortly after the attack, and said Zhukov was beaten over the head and pushed to the ground.

"According to eyewitnesses, he was attacked by two thugs who disappeared on scooters," Zhukov's spokesman Stas Toporkov said in a a post on Zhukov's Instagram page.

"Despite numerous injuries, Yegor remains calm and even jokes about what happened."

Read more:Russia: Navalny ally and activist sent to Arctic base

According to Ekho Moskvy's editor-in-chief, Alexei Venediktov, Zhukov filed a complaint with police after two unknown men allegedly ambushed him outside of his apartment on Sunday and beat him.

Zhukov, a fierce critic of President Vladimir Putin, became well-known through his involvement in opposition protests, and once said he wanted to be president himself.

He was arrested in August 2019 on charges of participating in mass protests in Moscow, which erupted after independent and opposition candidates were barred from contesting local elections. Zhukov was later placed under house arrest and charged with making online calls for extremism. Russian investigators dropped the first charges, but accused him of public calls for extremism.

Zhukov was handed a three-year suspended sentence and banned from running his own website for two years by a Moscow court in December last year.

Earlier on Sunday, Zhukov said he had been excluded from a Master's degree course at the prestigious Higher School of Economics in Moscow, shortly after enrolling.

He said that a university administrator told him the decision had been taken "on orders from above."

Russia's opposition activists have complained of a growing number of attacks and punitive legal cases against Kremlin critics following a vote on changes to the constitution that allow Putin to extend his rule.