Russia-Ukraine updates: Moscow warns of possible end to relations with US 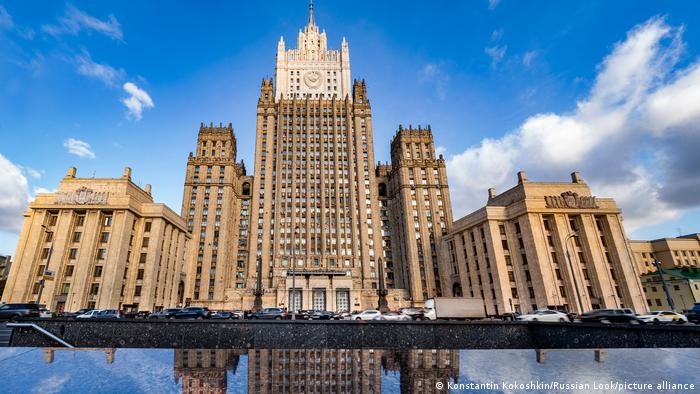 It comes as top Western officials have suggested seizing frozen Russian reserves to help fund the future reconstruction of Ukraine.

"We warn the Americans of the detrimental consequences of such actions that will permanently damage bilateral relations, which is neither in their — nor in our interests," said Alexander Darchiev, head of the ministry's North America department. It was unclear to which assets he was referring.

Meanwhile, Darchiev said Washington's involvement in Ukraine had increased to the degree that "Americans are increasingly becoming more and more a direct party in the conflict."

He also said that, if the US singled out Russia as a "state sponsor of terrorism," relations with Washington would have passed the point of no return.

Two US senators seeking to pass a law designating Russia as such visited Kyiv last month to discuss the bill with President Volodymyr Zelenskyy.

Here are the other main headlines from the war in Ukraine on August 13.

Zelenskyy: Ukraine will target those who target or use Zaporizhzhia as a shield

On Telegram, Ukrainian President Volodymyr Zelenskyy said that "every Russian soldier" who shoots at the Zaporizhzhia nuclear power plant or attempts to use it as a shield "must understand that he is becoming a special target for our intelligence and special services, for our army."

Ukraine and Russia have accused each other of firing on the plant following a series of recent incidents where the plant was shelled. Russia captured Zaporizhzhia, Europe's largest nuclear power plant, in March shortly after it launched its full-scale invasion on February 24.

G7 nations have called for a withdrawal of Russia's forces from the plant, a request Russia has already rejected.

Russia's Defense Ministry claims its forces have taken complete control of the village of Pisky, which lies on the outskirts of Donetsk city, as Moscow seeks to push west and north from the regional capital.

Russian and pro-Russian forces had initially reported that they had full control of Pisky more than a week ago.

However, a separatist official later said there were scattered pockets of resistance in its north and west.

The village was once a playground for Donetsk's wealthy classes, but it was devastated when the Russian-backed separatist offensive began in 2014. Close to the city's airport, it was the epicenter of fighting at the time.

The ministry also said Russian forces had destroyed a US-supplied HIMARS rocket system near the city of Kramatorsk in the Ukraine-held part of the Donetsk region.

Ukraine has urged Western states to help in its efforts to prosecute Russian war crimes committed during the invasion of the country.

Reznikov said had sent a corresponding request via the Foreign Ministry to the Ukraine Contact Group, which includes countries like the US, Britain and Germany and coordinates weapons deliveries for the Ukrainian military.

The minister also called for the establishment of "international groups that will help with the work on specific cases of Russian war crimes in Ukraine."

He stressed that the fate of Ukrainian prisoners of war was of particular concern, saying they were being tortured and killed on a large scale in Russian captivity.

"I have no doubt that after Ukraine's victory in this war we will, one way or another, catch all those involved in these barbaric killings and tortures," Reznikov wrote.

He said that not only the perpetrators, but also those giving orders and those who "justify those crimes" would be prosecuted.

A UK intelligence report says the two main road bridges that give Russia access to territory it has occupied on the west bank of the River Dnipro in Kherson Oblast are now probably out of use for substantial military resupply purposes.

Meanwhile, Russia has only succeeded in making superficial repairs to the damaged Antonivsky road bridge — which likely remains structurally undermined.

The main rail bridge near Kherson was also further damaged last week. Russia has been using a pontoon ferry near the railway bridge as its main military resupply route since late July.

Should Russia manage to make significant repairs to the bridges, they will remain a key vulnerability.

Supplies to thousands of troops on the western side are likely reliant on just two pontoon ferry crossing points.

With their supplies choked, the size of any Russian stockpiles Russia already on the west bank is likely to be a key factor in the force's endurance.

Zelenskyy's chief economic adviser Oleg Ustenko said that securing a new $5 billion (4.8 billion) loan from the International Monetary Fund (IMF) would help signal to Ukraine's other creditors that its macroeconomic situation was under control.

Ukraine is currently grappling with the internal displacement of some 7 million people, while dealing with energy shortages, rising inflation, and a worsening humanitarian crisis as winter approaches.

"An IMF program of $5 billion would be in line with earlier funding levels and might be a catalyst for funding from other
sources, including the EU, (the U.S.) Treasury and other individual countries," Ustenko told Reuters.

Moscow said it will not give Zaporizhzhia nuclear power plant back to Ukraine despite the G7 demand, Russian officials have said. Read this story and more from Friday here.