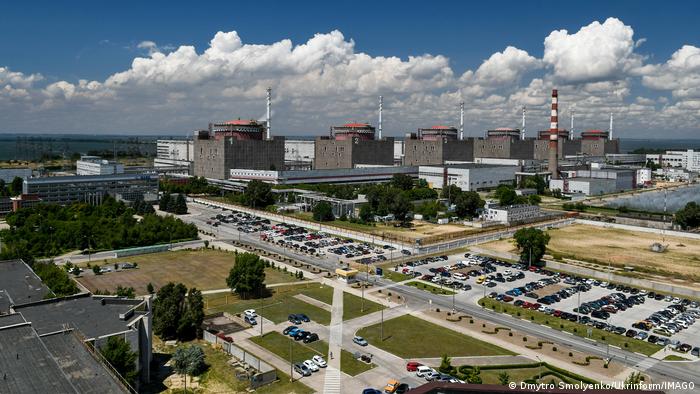 Leading Russian politicians are rejecting the G7's demand that Moscow hand control of the Zaporizhzhya nuclear power plant, which has been occupied by Russian troops since March, back to Ukraine.

"No, and no again," Konstantin Kosachev, deputy speaker of Russia's upper house of parliament, the Federation Council, answered when asked about the possible handover, according to the Russian Interfax news agency. To ensure the safety of the nuclear power plant, he said, complete control over the facility is necessary.

Kosachev's sentiment was echoed by the head of the Foreign Affairs Committee in the State Duma, Leonid Slutsky, who accused Ukraine of "nuclear terrorism."

"And all the statements of support by the G7 foreign ministers are nothing but sponsorship of nuclear terrorism," he wrote on his Telegram channel.

Ukraine has accused Russia of firing at Ukrainian towns from the site in the knowledge that Ukrainian forces could not risk returning fire. It says Moscow has shelled the area itself while blaming Ukraine. Russia says it is Ukraine that has shelled the plant. The security situation around the facility, which has been occupied by Russian troops since March, has deteriorated in recent days, with fresh shelling reported at the site on Thursday.

Meanwhile, the German government has expressed concern about the ongoing fighting in the area around Ukraine's Zaporizhzhya nuclear power plant.

Government spokesman Steffen Hebestreit said Berlin had "no findings of its own" that could confirm any of the conflicting accounts coming from Kyiv or Moscow, but Berlin was calling "on all sides to stop this highly dangerous shelling."

The European Union's foreign policy chief, Josep Borrell, also supported calls for demilitarization of the area starting with the full withdrawal of Russian forces and urged IAEA to visit. "Zaporizhzhia facility must not be used as part of any military operation," he wrote on Twitter.

Here are the other main headlines from the war in Ukraine on August 12.

Bilateral diplomatic relations between Russia and the United States would be badly damaged, or even broken off, if the latter brands Moscow a state sponsor of terrorism, Russian news agency TASS cited a top official as saying.

The Russian Foreign Ministry’s Alexander Darchiyev, who heads the North American department, said that if the US Senate succeeded in passing a law to single out Moscow, it would be taken as Washington crossing the point of no return.

Meanwhile, the US said it was concerned over reports that British, Swedish, and Croatian nationals were being charged by "illegitimate authorities in eastern Ukraine".

"Russia and its proxies have an obligation to respect international humanitarian law, including the rights & protections afforded to prisoners of war," Secretary of State Antony Blinken said on Twitter.

Pentagon says US weapons not used to attack Crimea airbase

The US Defense Department said on Friday that American-supplied weapons were not used to attack a Russian airbase in Crimea. The US also did not know the cause of the devastating explosions at the site, the Pentagon said.

No one has officially claimed responsibility, and Russia has called the incident an accident, but analysts say satellite photos and ground videos suggest an attack.

"We haven't provided anything that allows or that would enable them [Ukrainians] to strike into Crimea," a senior US defense official told reporters.

The official specifically said it could not have been a US precision-guided, medium-range tactical missile, known as ATACMS, which Kyiv has requested and which can be launched by US-supplied HIMARS systems already in Ukraine.

"It was not ATACMS, because we have not given them [Ukrainians] ATACMS," the defense official said.

In the period from April to June, gross domestic product "amounted to 96% of the level attained in the same period of 2021, preliminary estimates show," Rosstat said in a statement.

It was the first full quarterly growth data to be published since Moscow sent troops into Ukraine in late February and western countries slapped stinging economic sanctions on Russia in response.

After Russia's GDP expanded by 3.5% year-on-year in the first three months of 2022, the country is now facing a long period of recession.

The Czech Republic, which holds the rotating EU presidency, said Friday that a blanket ban on visas for all Russian travelers could be the bloc's next step directed at Moscow.

"The flat halting of Russian visas by all EU member states could be another very effective sanction," Czech Foreign Minister Jan Lipavsky said.

He said he would propose the idea at an informal meeting of EU foreign ministers in Prague at the end of August.

The strong reaction from Russia's elite shows that it is an effective sanctions tool, Kallas told Estonian radio.

Any damage to Zaporizhzhia plant would cause widespread disaster — scientist

Dr. Alex Rosen, member of IPPNW Deutschland (International Physicians for the Prevention of Nuclear War), told DW that he is "afraid and very concerned" about the dangerous situation around the Zaporizhzhia nuclear power plant, which has been occupied by Russian troops since March.

According to Rosen, any damage to the plant, be it from sabotage, cyberattacks, shelling or accidents, would cause a really widespread disaster depending on the direction and the strength of the wind.

"This is a big danger because one side could inadvertently or actually on purpose use this kill switch," Rosen said.

He added that a meltdown at the Zaporizhzhia nuclear power plant "would make large parts of the country uninhabitable for decades, if not centuries."

Ukraine's security agencies issued a joint statement on Friday calling for the United Nations and the International Committee of the Red Cross to send representatives to locations where Russia is holding Ukrainian prisoners of war (POWs).

The appeal follows earlier allegations by Kyiv that Moscow's forces have tortured and executed prisoners, including by staging an explosion in a Ukrainian POW camp in Olenivka. Moscow claims Ukraine shelled the facility, killing more than 50 POWs.

According to UN's World Food Program (WFP), The MV Brave Commander, which left Istanbul on Wednesday, is due to arrive in Yuzhne, east of Odessa on the Black Sea coast.

It will collect Ukrainian wheat grain purchased by the WFP, the agency's spokesman Tomson Phiri said.

"This is obviously the first shipment of humanitarian food assistance under the Black Sea Grain Initiative," he said.

Eight Russian fighter jets were damaged or destroyed, according to reports.

While the damaged jets make up only a fraction of the overall aviation fleet, Britain said Black Sea capability would be affected, since Saky is used as a primary operational base.

UN Secretary-General Antonio Guterres called for a demilitarized zone around Zaporizhzhia nuclear plant to ensure the safety of the area.

Former German Chancellor Gerhard Schröder has sued the German parliament, the Bundestag, for taking away some of his state privileges in May. The Bundestag had closed Schröder's publicly funded office and reallocated his staff after his refusal to condemn Russian leader Vladimir Putin for invading Ukraine.