An international tribunal has ruled that Russia must pay millions in damages to the Netherlands for seizing a Greenpeace icebreaker in 2013. Russian officials had also detained activists aboard the Dutch-flagged ship. 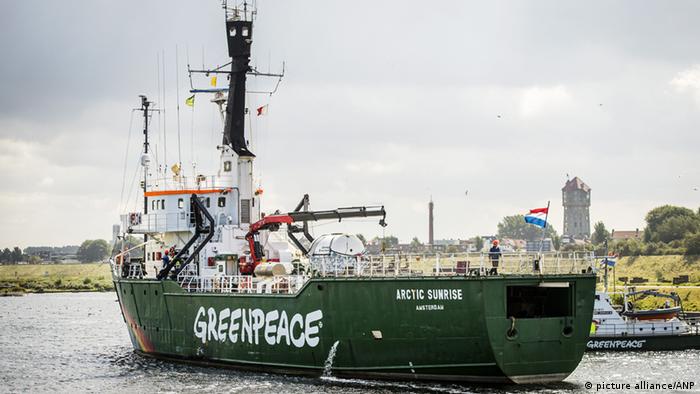 The Arctic Sunrise has docked in Amsterdam, almost a year after it was seized by Russia following a protest against Arctic oil drilling. Greenpeace said it hoped to have the vessel back on the ocean within two months. (10.08.2014)

Russian authorities have started issuing exit visas to the crew of the Greenpeace ship "Arctic Sunrise" after dropping criminal charges against the 30 activists. They had staged a protest at an oil rig in September. (26.12.2013)

An international arbitration panel has ruled Russia must compensate the Netherlands for seizing a Greenpeace ship. The Dutch-flagged Arctic Sunrise had been protesting Arctic oil drilling. (24.08.2015)

The Vienna-based panel determined on Tuesday that Moscow should pay over 5.4 million euros ($6.2 million) for boarding and seizing the Arctic Sunrise vessel and arresting Greenpeace protesters just outside the north polar circle.

"The road to justice can be long but today's award emphatically upholds international law and the right to peaceful protest against oil drilling in the Arctic - and at sea worldwide,” said Greenpeace International General Counsel Jasper Teulings.

'You can't just board ships'

At the time of the seizure, the ship carried 28 Greenpeace activists and two freelance journalists. The reporters were covering the activists' protest against an offshore oil platform run by Russia's energy company Gazprom. Two of the protesters allegedly tried to scale the the platform, prompting Russian authorities to seize the vessel and arrest everyone on board.

"The rulings make clear that you can't just board ships in international waters and arrest those on board," Dutch Foreign Affairs Minister Bert Koenders said on Tuesday. "The Arctic Sunrise was exercising the right to demonstrate."

Ship damaged while 'in custody'

The arrested activists, who later became known as the "Arctic 30," were first charged with piracy and later faced less severe hooliganism accusations. However, they were bailed out after spending two months in detention and later pardoned under an amnesty law endorsed by the Kremlin.

Russia eventually released the ice-breaker after holding it for almost ten months, but the organization took another month to make the ship seaworthy, as navigation and communication aids "disappeared or had been severely damaged," according to the organization. The ship has been used in other protests since.

This week, it will sail to the Barents Sea to protest drilling plans by Norwegian company "Statoil," the Russian branch of the environmental watchdog told the Interfax news agency on Tuesday.