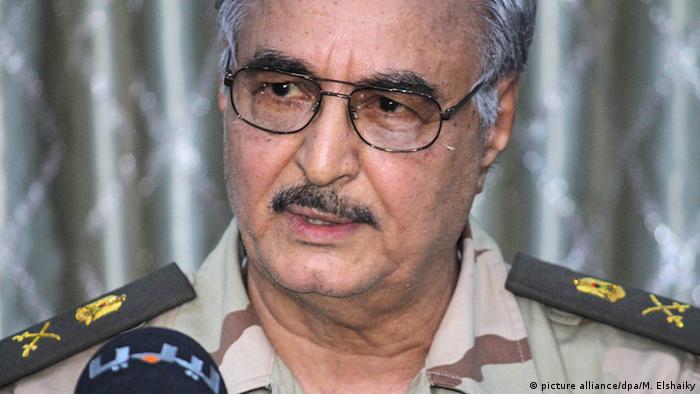 Haftar visited Moscow to meet with Russian Foreign Affairs Minister Sergey Lavrov, seeking a potential arms deal. In return, rumor has it that Moscow would receive permission to build a military base in Libya, granting it greater leverage to exert political influence on the country. A deal would also likely be a game-changer for Haftar, who seeks to take back the country from Islamist militants. Moscow thus far has denied allegations of going forward with any deal.

Libya has been split into two rival governments: one based in Tripoli and the other based in the eastern city of Tobruk. The government in Tripoli is backed by the United Nations, while the government in Tobruk supports Haftar. In December 2015, a unity government called the Government of National Accord (GNA) was founded. The GNA is the latest political solution promoted by the UN to end the civil war which began in 2014.

Many believe Haftar aspires to be a leader that can unite Libya, as his Libyan National Army (LNA) clears out Islamists in cities such as Benghazi. Others dislike Haftar, due to his military experience under longtime dictator Moammar Gadhafi - some see him as a remnant of the old regime. Gadhafi was killed in a NATO-led intervention in 2011.

Haftar enjoys the power he holds and is unlikely to relinquish any of his political leverage as head of the LNA for a position in the GNA. He's emboldened by his military victories against the Islamists in cities like Benghazi and does not want to merge his Libyan National Army with the new unity government in Tripoli.

However, Haftar's army is not the only force that seeks to fight against the Islamists in Libya. On Tuesday, the so-called "Islamic State" (IS) was driven out of their last stronghold in the country, the coastal city of Sirte, by militias aligned with the GNA. This is a major blow to IS in Libya. The militant group had controlled Sirte since early 2015.

Mattia Toaldo, a Libya expert and Senior Policy Fellow at the European Council on Foreign Relations in London, sees Libya as part of a greater Middle East strategy on behalf of the Kremlin. President Vladimir Putin seeks to improve his country's stake in Libya as a means to bolster alliances with other Arab countries such as Egypt, which is led by President Abdel Fatah El-Sissi. 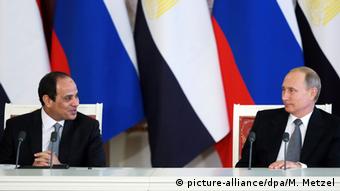 It's clear why Putin would like Haftar in the same way he supports El-Sissi. The Egyptian leader and Haftar both come from military backgrounds, and show a disdain for proponents of political Islam such as the Muslim Brotherhood.

Although there are no confirmed reports that Russia is going to go through with a deal, Toaldo agrees with the notion that a Russian military base in Libya could help cement Moscow's power in the Middle East.

"Russia could get a foothold in Libya that could be helpful in strengthening its overall position in the Mediterranean," he said. "There is increasing talk of a Russian base or even just docking rights in Benghazi. Coupled with Syria and in view of the rising ties with Egypt, this would allow Russia to have a much stronger position in this part of the world." 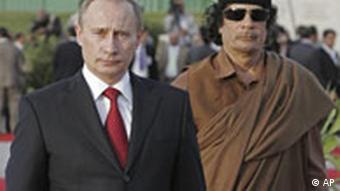 The UN proposed an arms embargo on Libya in 2011, an obstacle that Russia would have to contend with if it wants to do business with Haftar.

Russian support for Haftar draws parallels between Putin's intervention on behalf of President Bashar al-Assad's regime in Syria. Toaldo finds this comparison to be mostly fair: "Same logic, yes. A military strongman coming from an institution traditionally close to the USSR and then to Russia, fighting against Islamist terrorists as seen from Moscow. But I doubt that Putin will ever commit to Libya the same amount of forces he committed to Syria."

Russian support to Haftar would be mostly weapons sales. Syria, on the other hand, has seen the Russian air force bombing rebel positions in support of Assad for over a year now.

In any case, Russia hopes to expand its influence over a rapidly changing Middle East and become the region's dominant player.

Libyan forces have recaptured all of the coastal city of Sirte from the so-called "Islamic State," a spokesman says. If confirmed, the retaking of the city represents a major blow to the terror organization. (05.12.2016)

Rival factions deployed tanks and heavy weaponry on the streets of Tripoli as the Libyan capital was rocked by the worst outbreak of violence in two years. The exact reason for the fighting was not immediately clear. (02.12.2016)

US: Nord Stream 2 will not move forward if Russia invades Ukraine