Russia says both sides to blame in Syrian massacre

The Russian and British foreign ministers have held talks on the Syrian crisis as diplomatic efforts to resolve the situation gain pace. The meeting comes a day after the UN condemned a massacre in the town of Houla. 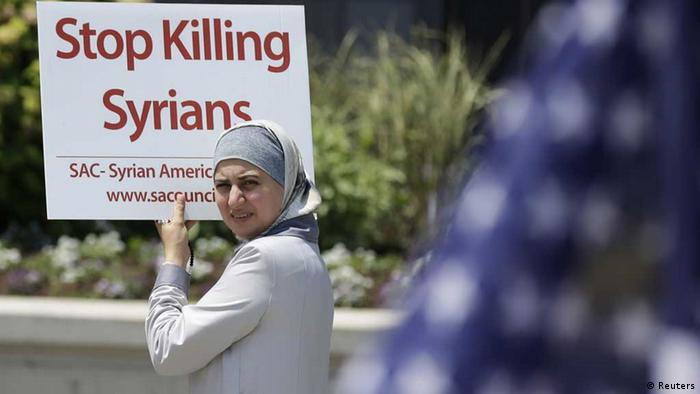 Russian Foreign Minister Sergey Lavrov said on Monday that both Syrian President Bashar Assad's government and rebels were to blame for a massacre on Friday in the town of Houla in which more than 100 people died.

Speaking after a joint news conference with visiting British Foreign Minister William Hague, Lavrov said: "We are dealing with a situation in which both sides evidently had a hand in the deaths of innocent people."

Lavrov spoke of Moscow's "deep alarm" at the massacre, and said both he and Hague agreed that pressure should be put both on the government and the rebels to end the violence.

However, Lavrov criticized nations that said Assad's exit from power was the only solution to the crisis, saying "who is in power" in Syria was less important than "ending the violence."

Hague said that Russia and Britain agreed that UN-Arab League envoy Kofi Annan's peace plan was "at the moment the only hope" for putting an end to the crisis, adding that Russia had an important role to play.

The talks came a day after the United Nations condemned Friday's massacre of more than 100 people, including many children.

In a non-binding statement issued after an emergency meeting on Sunday, the UN condemned the killings in the "strongest possible terms."

Agreed by all 15 member nations, including Syrian ally Russia, it said the attacks on the residential area in Houla "involved a series of government artillery and tank shellings." It avoided specifying, however, who was responsible for the massacre. 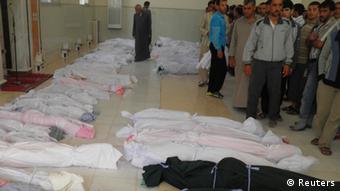 UN observers are investigating the circumstances of the killings

The statement reiterated calls for Assad to immediately withdraw heavy weapons from Syrian towns in line with Annan's peace plan.

Sunday's statement came after UN officials confirmed that the death toll from Friday's attack had climbed to 108, with 300 others injured.

The dead included 49 children. The head of the team of UN monitors in the country, Norwegian Major General Robert Mood, told the council via a video link from Damascus that the deaths had been caused by shrapnel and gunfire at point-blank range.

During the three-hour closed-door meeting, Britain and France had proposed issuing a statement pointing the finger more directly at the Syrian regime for Friday's attack. The wording was contested by Russia, however, which has questioned Damascus' role.

United Nations envoy Kofi Annan was meant to end the civil war in Syria, but the violence is continuing regardless. The UN observers are fighting a losing battle - but there is little alternative to the Annan plan. (27.05.2012)

"It still remains unclear what happened and what triggered what," Russia's deputy UN ambassador, Igor Pankin, told reporters after the meeting.

Earlier on Sunday he said there were "substantial grounds to believe that the majority of those who were killed were either slashed, cut by knives, or executed at point blank distance."

"It is difficult to imagine that the Syrian government would not only shell ... but also use point-black execution" against dozens of women and children, Pankin said.

The Syrian government has denied responsibility for the massacre, instead blaming "hundreds of heavily armed gunmen" who they said had also attacked soldiers in the area.

But Germany's UN ambassador, Peter Wittig, asserted there was "a clear footprint of the government in the massacre."

Meanwhile, the UN says Annan has arrived in Damascus for talks with Syrian leaders.

Syrian Foreign Ministry spokesman Jihad Makdissi confirmed earlier in an email that Annan would hold talks with Foreign Minister Walid al-Moualem on Monday ahead of talks with Assad on Tuesday.