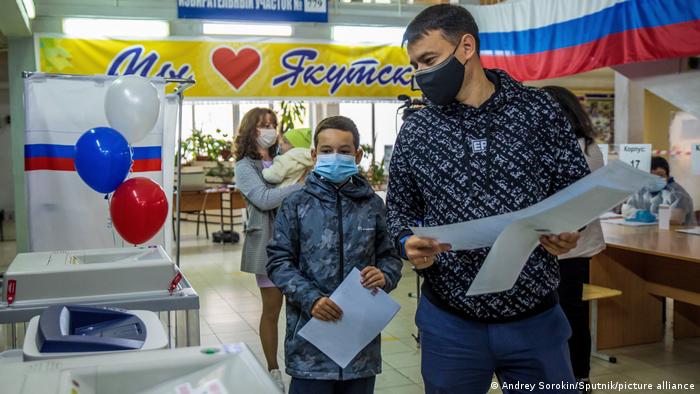 Voting kicked off on Friday and goes until Sunday

Russians began heading to the polls on Friday, the first of three days of voting, to elect new lawmakers amid claims by the opposition of a crackdown on dissent.

What are the reported violations?

Electoral commission director Ella Pamfilova said 137 complaints of voter "coercion" have been received so far from all over Russia.

The Golos election-monitoring organization recorded some 2,000 procedural violations on the first day of voting.

According to the Golos report, mass arrivals of people in uniform to cast their votes was particularly widespread, suggesting that the government was mobilizing public employees to secure a victory for the ruling United Russia party.

Golos also cited local media reports of several violations, including ballots being stored overnight in a cabinet with a broken door, as well as envelopes for storing ballot tallies appearing to have been opened and then resealed.

"Yesterday, we recorded three targeted attacks from abroad," said the head of the commission's center for information, Alexander Sokolchuk.

Khabarovsk looks for a voice as polls open in Russia

The Telegram messaging app restricted access to a voting campaign made by allies of jailed Kremlin critic Alexei Navalny.

The activists had earlier accused Alphabet's Google and Apple of submitting to pressure from the Kremlin and removing an app from their stores that Navalny's allies had hoped to use against the ruling party.

Dubbed "Smart Voting," the campaign had aimed to instruct Navalny's supporters on which candidate they should back to unseat Kremlin-aligned politicians.

"We consider this practice legitimate and urge Telegram users to respect it," Durov said late Friday.

Navalny's spokeswoman Kira Yarmysh slammed the move. "It's a real disgrace when the censorship is imposed by private companies that allegedly defend the ideas of freedom," she wrote on Twitter.

What are the expected results?

After polls close on Sunday, Russia is set to have a new State Duma, the lower house of parliament, in place for the next five years, as well as several new regional and city governments.

Despite a slump in ratings, the pro-Kremlin United Russia party is still widely expected to win the elections. However, it could lose its current two-thirds majority, which is enough to change the constitution. It is supported by President Vladimir Putin, for whom the election is an important test of the national mood.

The Communist Party, Russia's second-biggest party, is expected to win the biggest share of seats lost by United Russia.