With Tehran's support, Moscow has renewed its airstrikes against the last major rebel stronghold in Syria. The UN told DW that the looming battle could create the worst humanitarian crisis in decades. 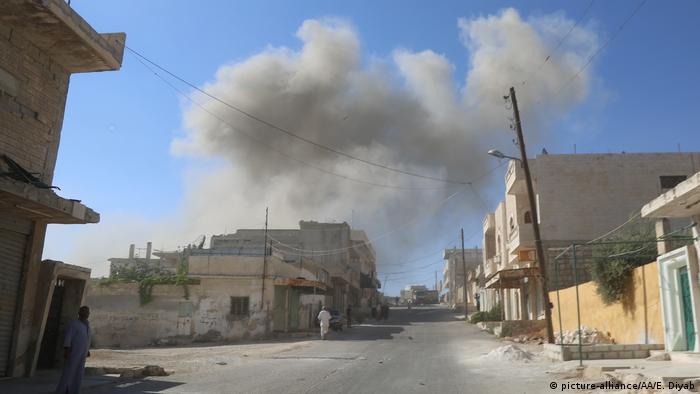 The Kremlin restarted its bombing campaign on the Syrian city of Idlib on Tuesday, over objections from the United States. British-based watchdog the Syrian Observatory for Human Rights (SOHR) reported airstrikes against the city on Tuesday.

The White House had warned that a "reckless attack" on one of the last rebel-held areas in the country would be a "grave humanitarian mistake" that could destabilize the peace process and kill thousands. Top US generals also cautioned that without more precise planning, Russia was risking the deaths of an untold number of civilians.

Iran, which supports Syrian President Bashar al-Assad, said it would also be helping remove militants from Idlib with the least amount of casualties possible.

"The situation in Idlib is sensitive," Foreign Minister Javad Zarif told state TV. "Our efforts are for...the exit of terrorists from Idlib to be carried out with the least human cost."

Russia: US has no Syria strategy

Moscow responded by accusing the administration of President Donald Trump of lacking "a comprehensive approach" to the Syrian conflict and called Idlib "a hornets' nest of terrorists."

In light of the strikes, Turkey announced that it was moving tanks to its border with Syria and reinforcing its observation posts near Idlib.

First seized from the government in March 2015, Idlib and the surrounding area is the last important chunk of territory in Syria held by rebels. Russia has been bombing the area intermittently since September 2015.

'The biggest catastrophe in decades'

UN Under-Secretary-General for Humanitarian Affairs and Emergency Relief Coordinator Mark Lowcock told DW that the looming battle for Idlib could prove to be the worst humanitarian crisis in decades.

"It could be the biggest humanitarian catastrophe we've seen for decades — certainly the biggest in the 21st century," Lowcock said, having just returned from Syria.

Lowcock described how there are between 3 and 4 million people in the southwestern city, many of them refugees from other party of Syria, living in tents with no means of protection from shelling.

An anticipated Syrian government offensive against the jihadi hotbed of Idlib province threatens to draw in multiple foreign powers and unleash massive suffering. Hundreds of thousands of civilians could be displaced. (30.08.2018)

Russia encroaches on US war industry in Middle East

Russia's offensive in Syria has brought unexpected consequences: US allies in the region are interested in acquiring Russian military hardware. But they could face serious backlash from the White House. (31.08.2018)