Russia has rebuffed a US suggestion that airstrikes on Syria launched from Iran may violate UN resolutions. The airstrikes deepen Russia's ties with Iran and Syria. 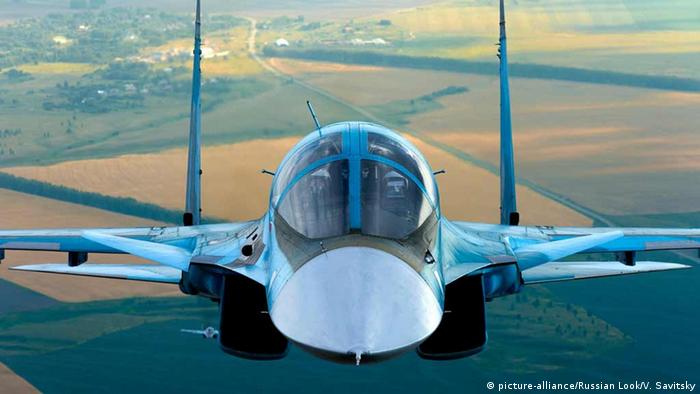 Russian fighter bombers conducted strikes on Syria from an airbase in Iran for a second day on Wednesday, rebuffing a suggestion from the United States that using the base may violate a UN Security Council resolution.

State Department spokesman Mark Toner said on Tuesday Russian airstrikes "didn't help" end fighting in Syria and the use of an Iranian base may violate a UN Security Council resolution prohibiting the supply, sale and transfer of combat aircraft to Iran.

Russian Foreign Minister Sergei Lavrov said on Wednesday his country's warplanes were only using the base and "there has been no supply, sale or transfer of combat jets to Iran."

"These aircraft are being used by Russia's air force with Iran's agreement as a part of an anti-terrorist operation at the request of Syria's leadership," Lavrov said at a news conference in Moscow, adding the US should not "nitpick about what is happening in terms of the remaining restrictions on trade and ties with Iran."

Alaeddin Boroujerdi, the head of the Iranian parliament's national security and foreign policy committee, said that the Russian warplanes were using the Shahid Nojeh Air Base to land and refuel.

He said they were using the base near the eastern city of Hamedan with the authorization of Iran's Supreme National Security Council.

The comments came as Iranian officials sought to quell any concern Russia's use of the base violates the country's constitution, which prohibits foreign militaries from having bases in Iran.

Ali Larijani, the speaker of Iran's parliament, highlighted in comments reported by state-run IRNA news agency that Russia had no permanent base in the country.

Former Iranian foreign minister Ali Akbar Velayati, who advises the Supreme Leader, said: "The matter should be considered a strategic and necessary cooperation in the fight against terrorism."

Russia airstrikes from Iran deepen the country's involvement in the Syrian conflict, where it is allied with Tehran in backing the Syrian regime against various rebel factions and the "Islamic State." They also send a strong signal to Syria and Iran's foes across the Middle East, particularly the Sunni Gulf States, as well as to the United States.

Moscow's deepening involvement comes as the Syrian regime and Iran-backed ground forces supported by Russia airstrikes are battling to retake the city Aleppo from rebels, including jihadists.

Russia said its bombers from Iran struck "Islamic State" targets in Deir al-Zour, an IS-controlled city in eastern Syria. Russia started conducting airstrikes from a base in western Syria last September to support the Assad regime.

Amid the fighting, Russia and the United States are trying to secure a ceasefire and in discussions on cooperating more closely against recognized terrorist groups.