Russia mulls import ban on cars from the West | Business | Economy and finance news from a German perspective | DW | 18.08.2014

Russia mulls import ban on cars from the West

Russia may expand retaliatory sanctions by imposing a ban on Western car imports. German carmakers could be severely hit by such a measure and are keeping their fingers crossed it will not happen. 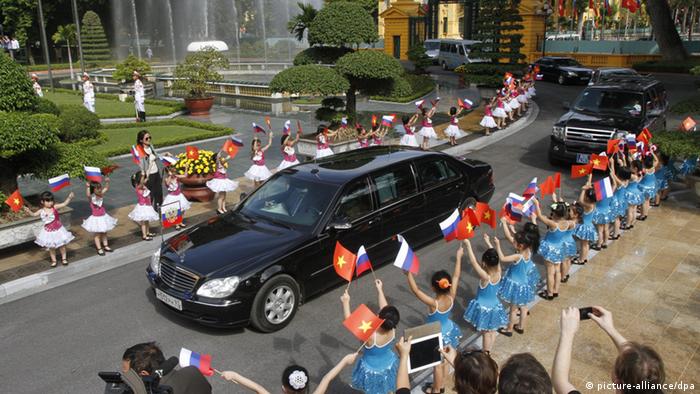 Moscow-based daily newspaper Vedomosti reported Monday that a ban on Western car imports cannot be ruled out, if the EU and the US decide to launch even more sanctions against Russia.

Vedomosti reported that such a ban had earlier been among a package of proposals put before President Vladimir Putin. He rejected the idea and ordered a ban on food imports instead, saying, however, that car import restrictions remained an option in the event that Western nations extended their sanctions on Russia.

The newspaper said the proposed ban would not affect foreign companies that produce cars for the Russian market in factories inside Russia. However, some high-end brands, including Daimler's Mercedes, are produced outside the country, and so would be subject to the ban.

"We're seriously concerned," said Jörg Schreiber, the chairman of the Automobile Manufacturers Committee of the Association of European Businesses. "We hope Russia will think twice before taking any such measures, as they would hurt manufacturers."

Imports accounted for 27 percent of passenger car sales in Russia in the first half of 2014, while for trucks and buses the percentages were 46 percent and 13 percent respectively. A ban on Western vehicles could benefit Asian carmakers such as China's Great Wall Motors and Chery Automobile, or South Korea's SsangYong Motors.

According to German media reports, Russian Prime Minister Dmitry Medvedev has issued an order saying that imports of Western limousines for high-ranking government officials must be severely restricted.

At the same time, the Russian leadership has asked domestic carmakers such as Sollers, Kamaz and GAZ to work together to design a suitable high-end limousine for members of the government, in a collaborative effort called Project Cortege. According to Russian media reports, the project will benefit from engineering input from German carmaker Porsche, a unit of Volkswagen Group.

For now, however, Russian President Putin and his entourage continue to make do with stretched and armoured Mercedes-Benz S-class sedans to fulfill their road transportation requirements.