The European Union will offer compensation payments to fruit and vegetable growers to temper the effect of retaliatory Russian sanctions on Western food producers. The money will be available until the end of November. 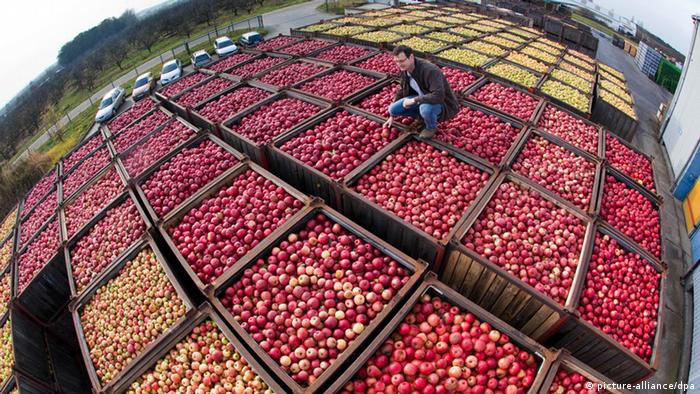 The European Union would pay fruit and vegetable farmers 125 million euros ($167.3 milllion) to help soften the impact of Russia's embargo on most Western foods, the European Commission said Monday.

It said it would tap funds within the bloc's Common Agricultural Policy (CAP), which includes emergency funds of 420 million euros available to compensate for market disruptions.

Russia's ban has targeted all meat, fish, dairy, fruit and vegetables from the European Union, United States, Canada, Australia, and Norway, and has created an overabundance of produce on European farms.

"With effect from today, I am triggering CAP emergency measures which will reduce the overall supply of a number of fruit and vegetable products on the European market as and when price pressures become too great in the coming months," Agriculture Commissioner Dacian Ciolos said.

The money from the Commission is designed to curb a surplus of food that has accumulated during peak harvest times, causing prices to plummet.

Farmers in Poland, Lithuania, Bulgaria and the Netherlands particularly stand to benefit from the subsidies - for them, Russia has been a big customer.

Affected crops have included carrots, tomatoes, cucumbers, mushrooms, apples, pears, grapes and kiwi fruits. Strawberries, raspberries, blackberries, and gooseberries, and currants are on the list of produce eligible for compensation payments as well.

From now until the end of November, farmers producing crops on the support list will be able to apply for EU funds.

"All farmers of the concerned products, whether in producer organizations or not, will be eligible to take up these market support measures," Ciolos said.

The EU already announced a week ago that it would offer financial assistance to peach and nectarine growers.