Russia has announced large-scale air defense exercises along its Ukraine border. The move is being perceived as a show of strength by Moscow, and is likely to further raise tensions in the region. 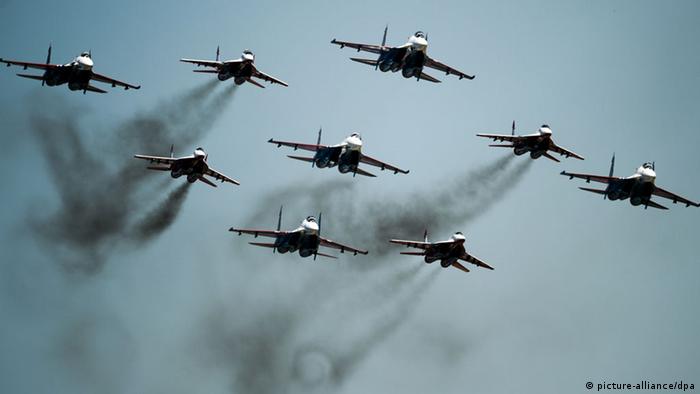 Russia has announced large-scale air defense exercises along its Ukraine border. The new military drills will involve around 100 aircraft, and will be staged from Monday through to Friday this week, a Russian air force spokesman told the Interfax news agency.

Air force spokesman Igor Klimov told AFP the drills were "a routine event." He said they were not related to the ongoing conflict between government forces and pro-Russian separatists in eastern Ukraine.

During the drills, the military will conduct missile launches and test aircraft weapons against land and air targets, he added.

Russia launched drills involving S-300 surface-to-air missiles last week, and the military also indicated this month it would test the next generation of the missile systems, the S-400.

It's not the first time Russia has held exercises next to the war-torn region. Moscow also staged military exercises near Ukraine in March after the conflict flared up - deepening the rift between the West and Russia.

However, this latest move could further alarm Western powers, which have accused Russia of bolstering troops along Ukraine's border, as well as supplying separatists with weapons. Russia has denied these allegations.

Pro-Russian separatists fighting in eastern Ukraine appear to have lost ground against government forces in recent weeks, while Russia has a firm hold on Crimea, which it annexed in March.

Germany has withdrawn government approval of the export of a military exercise field simulator to Russia. Berlin had already put the deal on hold after Russia annexed Ukraine's Crimea earlier in the year. (04.08.2014)

Russian President Putin has signed a bill that would annex Crimea, little more than a day after the region voted to join Russia. The US, meanwhile, has sent its vice president to eastern Europe as a message to Moscow. (18.03.2014)