Prosecutors had accused the Russian journalist of creating an "extremist" group aimed at overthrowing authorities. But the group had actually called for a referendum for increased transparency from serving officials. 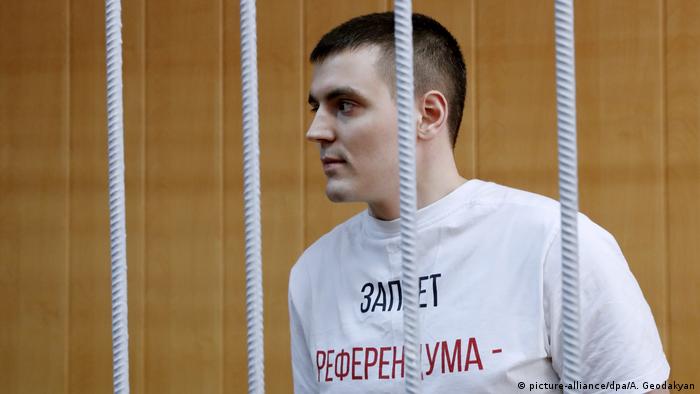 A Russian court on Thursday sentenced an investigative journalist to three and a half years in prison after convicting him on extremism charges.

"The idea of holding a referendum against the present-day authorities was recognized to be an extremist one. But we have not finished yet, we will keep fighting," Sokolov said from a metal cage in the courtroom.

Sokolov worked for RBK news agency when police arrested him in June 2015. The agency has since been sold to the owner of a pro-Kremlin newspaper.

The trial drew criticism from several media rights agencies including the Paris-based Reporters Without Borders (RSF) and Memorial in Russia.

"By persisting with this prosecution despite two years of pre-trial detention, vacillating allegations, no hard evidence and an Orwellian charge, the judicial authorities have just reinforced the impression that Alexander Sokolov is being persecuted because his journalist activities were a source of irritation."

Read more: The rise of citizen journalism and its impact on traditional journalism in Russia

Before his arrest, Sokolov researched the alleged embezzlement of 93 billion rubles (1.32 billion euros, $1.55 billion) from public coffers during the construction of a new space port. The space center was considered a brainchild of Russian President Vladimir Putin.

Russia ranked 148 out of 180 countries on RSF's 2017 Press Freedom Index. "The oppressive climate at the national level encourages powerful provincial officials far from Moscow to crack down even harder on their media critics," RSF said in its 2017 global report on press freedom.