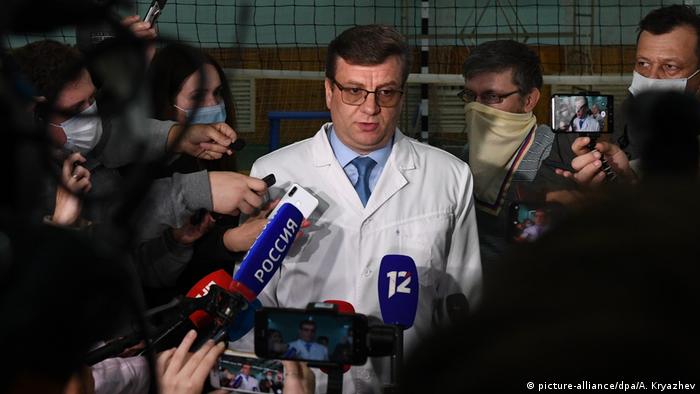 In this photo from August 2020, Murakhovsky speaks with the press after treating opposition leader Alexei Navalny

Alexander Murakhovsky, the doctor who first treated Kremlin critic Alexei Navalny after he collapsed on a flight in Russia last year, has reappeared after going missing during a hunting expedition on Friday.

Russia's TASS news agency on Monday reported that the physician was in "normal" condition after he walked out of the woods on his own.

He'd last been seen leaving a hunting base in a forest in the Omsk region on Friday — around 2,200 km (1,370 miles) east of Moscow — driving an all-terrain vehicle.

The report said that Murakhovsky was not receiving medical treatment.

Murakhovsky was promoted to the position of regional health minister last November.

What is the doctor's link to Navalny?

Murakhovsky was the head doctor at the hospital that Navalny was taken in late August 2020 after he fell violently ill during a domestic flight from Siberia to Moscow.

Navalny was eventually allowed to be airlifted to Germany for further treatment after tense negotiations with authorities.

Murakhovsky had said that initial laboratory tests after treating Navalny had not shown traces of the Novichok nerve agent.

Tests by laboratories in three European countries, confirmed by the international chemical weapons watchdog OPCW, determined that the Soviet-era poison had in fact been used on the opposition figure.

The Kremlin has denied accusations of being behind the attempted killing of one of President Vladimir Putin's main political opponents.

Navalny was arrested in February after returning to Russia from Germany on what he has called trumped-up charges.

The treatment of the political activist, as well as his supporters, by Russian authorities, has triggered an international outcry and calls for Navalny's release.

This article was originally published on May 9, 2021 and has been updated following reports that Alexander Murakhovsky was found alive after going missing.