Russia has told the United Nations Security Council that British intelligence services probably poisoned Sergei Skripal. The US accused Russia of peddling conspiracy theories and said it stood behind the UK. 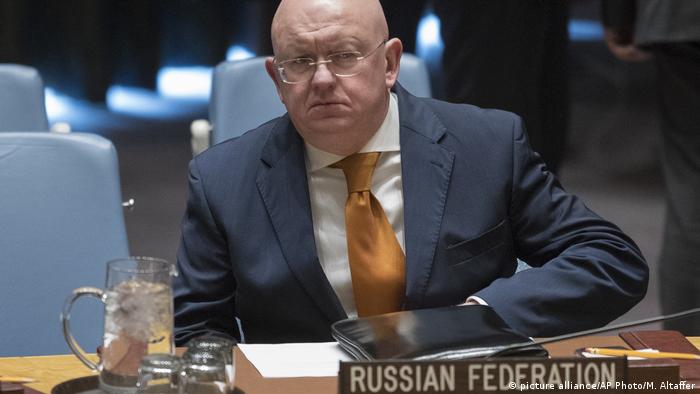 Russia's ambassador to the United Nations, Vasily Nebenzya, accused the UK of being responsible for the poisoning of ex-spy Sergei Skripal and his daughter in a blistering address to the UN Security Council on Thursday.

His speech covered a series of discrepancies he saw in the British response to the Salisbury attack.

"It is more than likely that this very questionable case is a fabrication."

"It's some sort of theater of the absurd. Couldn't you come up with a better fake story?" Nebenzya added.

Nebenzya said the UK had admitted it was in possession of the nerve agent.

"Novichok is not copyrighted by Russia in spite of the obviously Russian name. It was a name that was invented in the west for a line of toxic substances, which is nothing new for experts and scientists. They were developed in many countries including in the US and in Great Britain."

"Boris Johnson confirmed to German broadcaster Deutsche Welle that they have this substance in their hands."

He said Porton Down scientist Gary Aitkenhead had revealed that his lab had samples of Novichok when he told Sky News that the substance could not "leave the four walls of our facilities."

"What was this that couldn't leave the laboratory? And does the OPCW know about his substance," he asked.

He said the British investigation had leapt to conclusions and left many questions unanswered.

"I don't think that the British investigative bodies are grateful to the British government for their hasty and unequivocal conclusions. Your politicians never thought about this, they had no idea that their hyped up statements might boomerang and hit them."

He listed a series of unanswered questions that he said cast doubt on the British conclusions, including: "Where were the Skripals for four hours with their phones switched off? How were the samples taken and who can confirm their reliability? Why weren't relatives asked for their approval to take blood samples? How did the antidote against an unknown chemical substance appear so quickly and was it injected?"

"We all know what the worth of British intelligence is based on the experience of Tony Blair."

He warned Britain that it had poisoned Russia's international relations without proper evidence.

"We have told our British colleagues that you are playing with fire and you'll be sorry."

British Ambassador Karen Pierce said London would not "take any lectures on morality or on our responsibilities from a country that, as this council debated yesterday, has done so much to block the proper investigation of the use of chemical weapons in Syria."

Britain's actions "stand up to any scrutiny" and pledged to keep the 15-member body updated on the inquiry.

"We have nothing to hide ... but I do fear that Russia might have something to fear," Pierce said.

Meanwhile, the US accused Russia of peddling conspiracy theories and reaffirmed its support for Britain.

"The fact that a permanent member of this council was behind an incident like this is appalling," said deputy US ambassador to the UN Kelley Currie.

She said the US stood beside the UK over the matter.