Some of Europe's most important stands of old-growth and primeval forests are under attack from illegal logging. Within the past two months, two forest workers have been murdered. 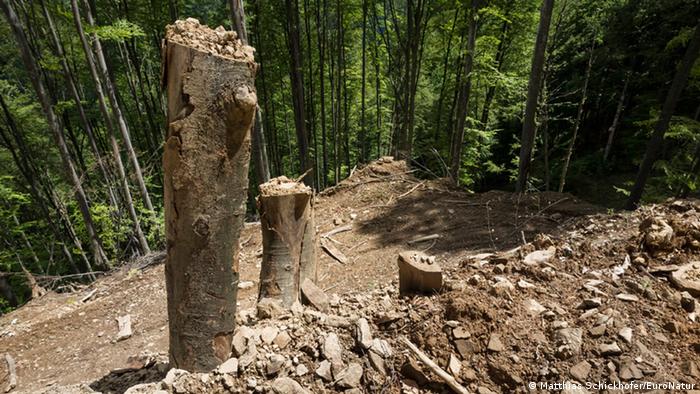 Several thousand Romanians marched in the capital, Bucharest, and other cities on Sunday demanding a halt to illegal logging and calling for the preservation of old-growth forests.

Greenpeace Romania and other environmental groups want investigations into attacks on forestry workers by organized crime syndicates, and have demanded that legislation against illegal logging be strengthened.

The Silva trade union federation says six foresters have been killed in recent years, and more than 650 attacked. Within the past two months alone, two forest workers whose job it was to combat illegal logging have been killed.

Read more: Deforestation in the Carpathians

Romania has some of the biggest stands of old-growth and primeval forests in Europe.

Greenpeace estimates between 3 to 9 hectares (7.4 to 22.2 acres) of forest are lost per hour due to illegal logging.

In September, a group of European NGOs filed a complaint with the European Commission against the Romanian government, alleging logging operations are in violation of EU law.

Deforestation in the Carpathians

Deforestation in the Carpathians

How the EU funds its economically disadvantaged regions

The EU spends a fifth of its budget on "regional development": That's €200 billion to support universities, roads, businesses, banks and more. This analysis shows how the European Union's regions benefit from EU funding. (08.05.2019)