Twenty percent of Romanians live and work abroad — more than in any other EU country. But that doesn't mean they are ignoring political events at home. 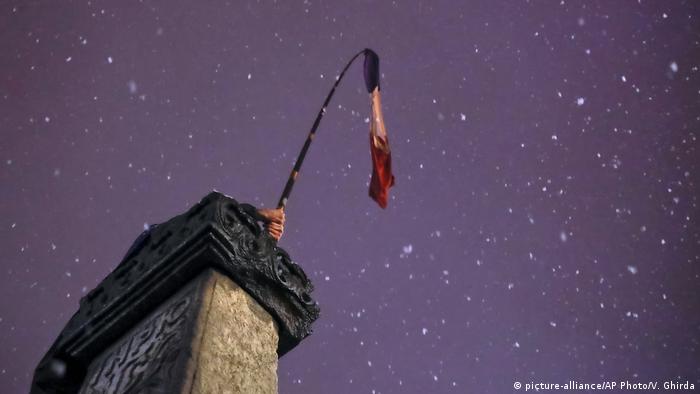 On August 10, 2018, tens of thousands of Romanians living abroad returned to the southeastern European state to take part in the mass protests staged by civil society groups against government corruption.

In Bucharest, authorities violently broke up the protests, indiscriminately assaulting peaceful demonstrators with batons and firing canisters of tear gas.

On Saturday, many Romanians in Bucharest intend to take to the streets again to mark one year since the violence racked the anti-government protests. 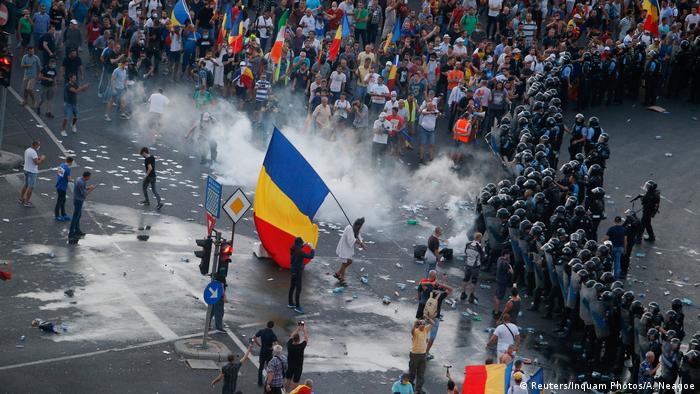 The August 10, 2018, protest saw huge numbers of emigrants return to demonstrate in Romania

But Camelia and Laurentiu will not be attending the marches. The couple moved to the German city of Worms one year ago and is in the process of adjusting to life in a foreign country.

The path to emigration

Camelia, 46, and her 48-year-old husband, Laurentiu, did not have Germany at the top of their list of possible destination in August 2018 when they decided they wanted to leave their homeland with their two young sons. But, according to Camelia, "Someone up there must love us because we could not have found a better country than Germany."

The pair had built up a successful short-term tourist rental business in Romania but saw themselves pushed out of the market by deep-pocketed foreign businesses.

"Wealthy foreigners came along and bought dozens of apartments and ruined the prices," Camelia said. 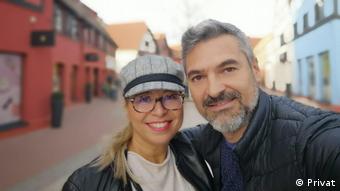 Germany wasn't Camelia and Laurentiu initial choice, but they said they are happy in the country

Soon the family was not earning enough and the prospects of getting a permanent job were poor: "Either we were told we were too old for the job or we were overqualified — it was so humiliating."

In August 2018, as the social and political upheavals were reaching a new high, the couple made the decision: They wanted to try their luck abroad. They looked to the example set by close friends who had found a new home on Crete. Well-paid jobs somewhere by the sea were what Camelia and Laurentiu were looking for, but that dream didn't become reality. There weren't many good jobs available on the island and affordable apartments were scarce.

Then they got a call out of the blue from a good friend in Germany who could offer them a job. "At that point, we'd never been to Germany. We couldn't speak the language," Laurentiu said. "Also, you often hear that Germans are too uptight."

Still, the family sold its car for some money to finance a fresh start and headed west.

Around 700,000 people of Romanian origin lived in Germany as of early 2019, according to the Federal Statistics Office. 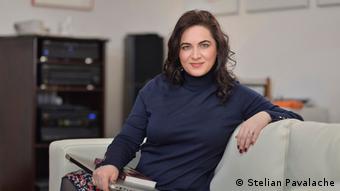 It's important to differentiate between different generations of Romanian emigrants, Mirescu said

There are more than 1 million Romanians living and working in both Italy and Spain. According to the OECD, Romania is one of the top countries of origin for family migration and free movement within the EU.

Romanian authorities estimate that some 4 million people emigrated from the country, equal to about 20% of the total population and, in the summer, when seasonal workers leave for jobs in construction and agriculture, the number increases up to 5 million.

Gabriela Mirescu, a political scientist from Romania, lives in Switzerland. She said she sees a distinction between the two generations of Romanians who have left the country since the political upheaval 30 years ago.

"In the early 1990s, a Romanian doctor in the West often had to start out as a taxi driver and wait years for his studies to be recognized," she said. "Today doctors arrive with a contract in their pockets and start work straight away."

For Mirescu, there is a significant difference in the experience of someone who had to struggle to catch up with society and someone who is able to integrate quickly into new surroundings without major complications.

But what unifies both generations, she said, is a desire not just to send money home to family members every month, but to remain informed on Romania's political developments.