Despite hundreds being injured the night before, tens of thousands of people have again protested in Bucharest. Romania remains one of the poorest and most corrupt countries in the EU. 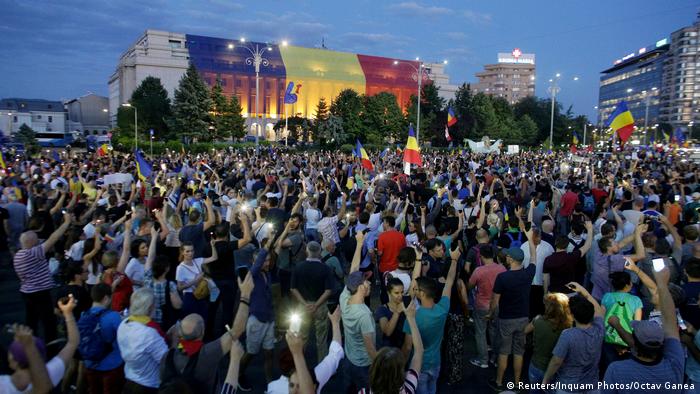 Tens of thousands of Romanians gathered for a second night of protests in the capital, Bucharest, on Saturday, after 455 people were injured the day before.

The protesters were demanding the resignation of the Social Democrat government.

Saturday's protest was largely peaceful after the previous demonstration turned violent and 30 people were arrested. Security forces held back this time as people chanted "Down with the government!" and "Justice, not corruption!"

"I came after seeing what happened on Friday on television — the brutality of the police against peaceful people," Floarea Toader, 64, told the Agence France-Presse news agency.

"My children work in Spain and they would like to come back. But for now that's not possible as the politicians are only interested in themselves and do nothing for anyone else."

Rallies have been repeatedly held since the leftist government took power in early 2017 and attempted to roll back corruption protections. The country's top anti-graft prosecutor Laura Codruta Kovesi was fired in July, raising concern in Brussels.

Romania is one of the poorest and most corrupt members of the European Union.

Romania has been criticized for its heavy response to Friday's protests. Sebastian Kurz, chancellor of Austria, which holds the EU rotating presidency, said: "We strongly condemn the violent clashes in Bucharest where numerous demonstrators and journalists were injured. We expect full explanations."

Earlier Saturday, riot police said they were justified in their use of state violence as protesters had been warned several times to leave the square.

Austrian public broadcaster ORF said Saturday that one of its cameramen had been beaten by police while a TV presenter was shoved up against a wall.

Many Romanians who left their homeland because of corruption, low wages and lack of opportunities returned to rally for the government's resignation. Police responded to the protests with a water cannon and tear gas. (10.08.2018)