Many Romanians who left their homeland because of corruption, low wages and lack of opportunities returned to rally for the government's resignation. Police responded to the protests with a water cannon and tear gas. 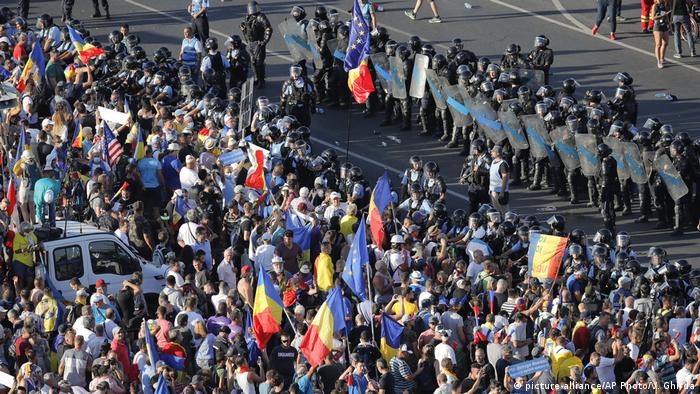 Hundreds of Romanian expatriates have driven across Europe to join the compatriots in an anti-government protest that local media said drew between 50,000 and 80,000 people on Friday.

Romanian President Klaus Iohannis, a critic of the government, said he "firmly condemned the brutal intervention of riot police," which he called a disproportionate reaction to mostly peaceful protests.

Romania's ruling Social Democratic Party (PSD) has been targeting the judiciary following a string of high-profile graft investigations by the country's anti-corruption agency (DNA) and convictions of senior PSD officials. The left-wing party tried to decriminalize several corruption offenses through an emergency decree last year, however, following anti-government street protests, the PSD was forced to withdraw the decree.

Since their election victory in December 2016, Romanians have regularly protested moves by the PSD and its junior, liberal, partner ALDE to weaken the DNA's fight against corruption.

Hundreds of thousands of Romanians have demanded a law that would ban from office people convicted of corruption.

In July, police in Romania seized the number plates from a man who registered a car in Sweden with letters featuring a derogatory phrase aimed at Romania's ruling Social Democratic Party (PSD). Razyan Stefanescu's personalized plates read "MUIEPSD" which translates as F***PSD" — a slogan often used at anti-government protests. Images of his vehicle went viral on social media.

After months of legal turmoil, Romania's anti-corruption chief has been fired. Her sacking and controversial legal reforms to weaken corruption charges is raising concern in Brussels. (10.07.2018)