After months of legal turmoil, Romania's anti-corruption chief has been fired. Her sacking and controversial legal reforms to weaken corruption charges is raising concern in Brussels. 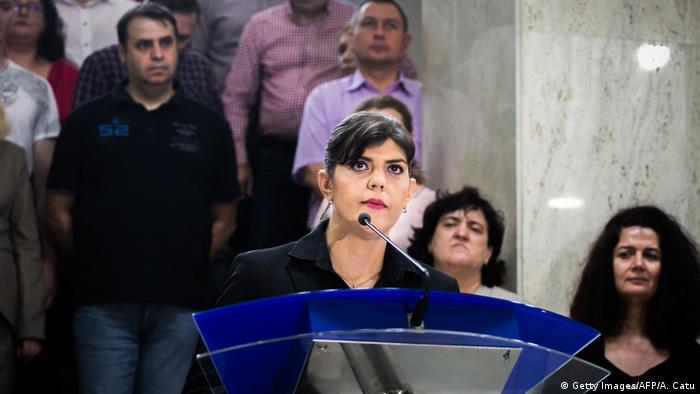 Iohannis had for months refused to sack the popular head of the Anti-Corruption Prosecutor's Office (DNA), who the left-wing government accused of overstepping her authority and ordered dismissed.

The president said he was forced to comply with a Constitutional Court ruling in May backing the demand of the ruling Social Democratic Party (PSD) to sack Kovesi.

"In a state governed by the rule of law decisions of the Constitutional Court must be respected," Iohannis' office said in a statement, adding that the "fight against corruption will not stop."

Flanked by dozens of prosecutors, a defiant Kovesi made a televised address calling on Romanians to continue to fight corruption.

"I have a message for the Romanian people: Corruption can be defeated. Don't give up!" she said.

She also accused politicians of seeking controversial legal reforms to weaken criminal convictions for "protection for the past, the present and the future."

In office since 2013, Kovesi has gained international praise for her drive to fight graft in one of the EU's most corrupt member states.

Hundreds of local and national officials, including three ministers, five MPs and a senator, have been prosecuted for bribery, fraud and other corruption offenses.

The justice systems in Romania and Bulgaria are under special monitoring of the EU.

The European Commission said Monday the independence the Romania's judicial system and the fight against corruption were of "paramount importance."

"The ability of the national anti-corruption directorate to maintain its track record in challenging circumstances was an important sign of sustainability. If this track record ... were to be called into question, the Commission may have to reassess this conclusion," said Commission spokesman Christian Wigand. 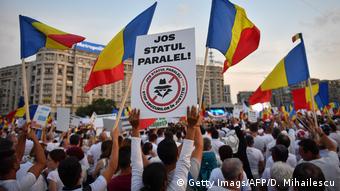 The government has organized counterprotests against what it calls a judicial "parallel state."

Justice Minister Tudorel Toader launched a process to oust Kovesi in February, citing violations of the constitution and her efforts to damage Romania's image abroad.

The assault against Kovesi triggered anti-corruption street protests throughout the winter.

However, the government then took the case to the constitutional court, which found that the president was limited to assessing the legality of the removal procedure and was not authorized to oppose the dismissal request that the justice minister legally initiated.

Kovesi's sacking comes as the government pushed through judicial reforms last week that critics say would weaken anti-corruption efforts and undermine the rule of law.

The new law is viewed by critics as a way to protect PSD leader Liviu Dragnea.

Iohannis, who must sign the law for it to go into effect, opposes weakening the fight against corruption  The case is likely to head to the constitutional court and lead to a heated political fight.

Dragnea is barred from the prime minister post over an electoral fraud charge, but wields influence from behind the scenes. Last month, he received another prison sentence over a fake jobs scandal.

Liviu Dragnea, head of Romania's ruling Social Democrats and parliamentary president, has been sentenced to 3 1/2 years in prison. This is the end of the road for the corrupt politician, says Robert Schwartz. (22.06.2018)