Romania: Seeking a return to normality | Europe | News and current affairs from around the continent | DW | 24.11.2019

Romania: Seeking a return to normality

The Romanian president, Klaus Iohannis, is hoping to win a second term in office. This Sunday, he will find out whether he will be able to continue his efforts to create a "normal Romania."

Sibiu in November 2019. This delightful medieval town in Transylvania is all dressed up for the festive season. Its Christmas market is generally described as the prettiest in the country. Klaus Iohannis, the Romanian head of state, can be proud of "his" old town. It was in Sibiu that his meteoric rise in Romanian politics began. He was mayor here for 14 years, during which the town became a model of successful local government politics in a country where nepotism and corruption were rife. Romania seems to have had difficulty divesting itself of its communist legacy,

Five years ago, Klaus Iohannis was elected president of Romania, amid a great deal of premature praise. The electorate was persuaded by his vow to change Romania "one step at a time." However, Iohannis, the candidate of the liberal-conservative PNL party, soon came to realize that the capital, Bucharest, was a very different place to his sheltered hometown. His political opponents, above all the post-communist, nominally social-democratic PSD, quickly located his Achilles heel and exploited it for nationalist-populist gain.

Iohannis is from the German minority of Transylvanian Saxons, and unlike the majority of Romanians, he doesn't belong to the Orthodox Church but is an Evangelical Lutheran. He's a staunch European who speaks several languages.

Most Romanians wouldn't have a problem with this. However, these were the perfect ingredients for the left-wing nationalist propaganda machine to launch a non-stop defamation campaign. Iohannis, they said, was not a "real" Romanian; he couldn't love his country like a "true" patriot; he was "selling out” his country in Brussels and Berlin — and in German or English, what's more.

This was one of the reasons why, during the current election campaign, Klaus Iohannis declined to participate in a televised debate with his challenger Viorica Dancila, the PSD leader who was fired as prime minister a few weeks ago. The president said he didn't want to give his opponents a platform to launch personal attacks. The PSD, he said, was a force that had been "at war" with its own country and against its own citizens for the past three years. You could not have a normal debate with a party like that, he explained. 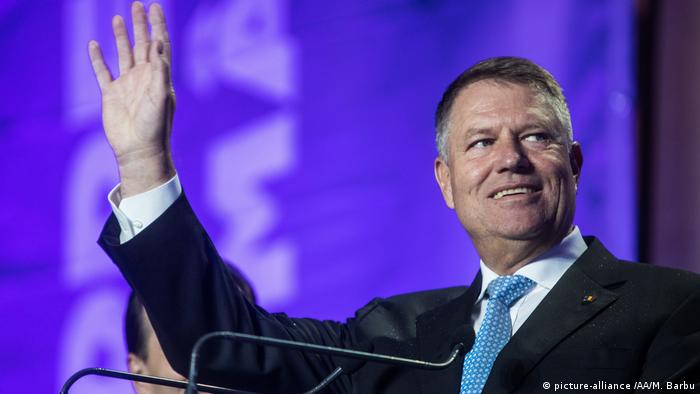 Iohannis was mayor of Sibiu for 14 years

Iohannis has openly challenged the post-communist PSD. In government until just recently, the PSD pressed ahead with dismantling the democratic constitutional state. This has been repeatedly and heavily criticized not only by Iohannis, but also by the European Commission and the European Parliament.

In early 2017, the PSD's attempts to scale down the war on corruption and bring the judiciary under its control led to mass protests in Bucharest and throughout the country. Responding to desperate appeals from civil society, President Iohannis joined the demonstrators outside the Palace of Parliament. However, he was subsequently forced to cede to pressure from the government and the PSD-dominated constitutional court and accept part of the controversial "reform of the judiciary."

He was also ultimately powerless to prevent the dismissal of the internationally esteemed head of the anti-corruption authority, Laura Kövesi. However, by virtue of his unequivocal stance in favor of an independent judiciary and against the weakening of the constitutional state, he was at least able to block some of the government's plans that would have guaranteed immunity to corrupt politicians.

'Down with the establishment'

Iohannis is accused of being excessively loyal to the constitution — especially by younger Romanians, who are leaving their country in droves because they've lost faith in politics. Many Romanians want authentic change, a new, democratic constitution and a renunciation of an establishment that is still pulling the strings 30 years after the fall of communism. 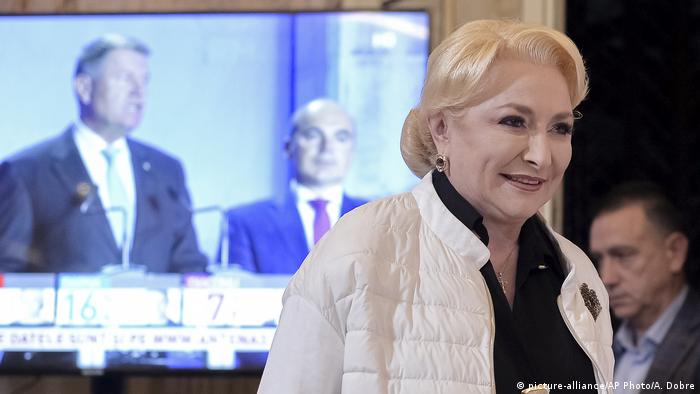 Dancila trailed far behind Iohannis in the first round of elections

The chances are good. In the European election on May 26, pro-European forces (the PNL and the newcomer alliance USR-PLUS) attracted the majority of votes, while the PSD scored its worst-ever result. Just one day later, the all-powerful PSD leader and power broker Liviu Dragnea was sentenced to several years' imprisonment for abuse of office.

Less than six months later, a new majority of former fellow travelers and defectors in parliament passed a vote of no confidence against the cabinet of Viorica Dancila, and the PNL assumed government under its party leader, Ludovic Orban. The government relies on a parliamentary majority of convenience, which doesn't always work in its favor, but is capable, with Iohannis, of returning the country to the "normality" the president is hoping for in his second term in office. If the polls are to be believed, the runoff ballot this Sunday should bring him one step closer to his goal.