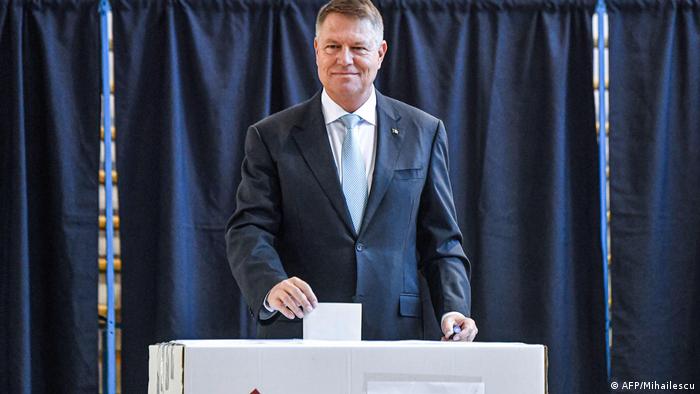 That would mean a runoff with Dancila on November 24.

"We have beaten the Social Democrats," Iohannis told supporters. "But the war is not over, we have to take another step forward in two weeks," he said.

Dancila said she was "happy" with the result. "We are present in the second round, I thank those who voted with their hearts," he added.

Final results from the first round will take a while to be tallied, due to a record 650,000 votes from Romanians abroad that need to be processed. But analysts have these will not be enough to knock Dancila out of the race.

Iohannis, an anti-graft policymaker who has won praise in the West for his commitment to the rule of law, is widely seen as winning any second-round vote.

Dancila was prime minister until last month, when her PSD was ousted in a no-confidence vote over corruption allegations. Last week, parliament approved a new transitional minority government of new PM Ludovic Orban of the centrist National Liberal Party. Orban will steer the country towards a general election next year.

Romania's presidency is more than a ceremonial role. The president is commander in chief of the armed forces, nominates a prime minister — who has executive powers — and can veto laws adopted by parliament.

Observers said a win for Iohannis might bolster the National Liberal Party's chance of forming a stronger coalition after next year's parliamentary election and restore investor confidence eroded by several years of political instability and high levels of public spending.

Romania has faced European Union monitoring over progress on reform of its judiciary since 2007. But a succession of PSD governments has tried to roll back certain anti-corruption rules in recent years, joining the ranks of other ex-communist states in the bloc in incurring criticism over the rule of law.

Iohannis, who won his first term as president in 2014, had challenged the contested overhaul of the judiciary and attempts to limit magistrates' independence.

He also spearheaded a national referendum where an overwhelming majority of Romanians said they wanted the government to be banned from altering legislation via emergency decrees, and advocated a national ban on granting amnesties and pardons for graft-related crimes.

Just over 18.2 million voters were eligible to cast their ballots.

The Romanian newspapers were silent; the Croatian ones cheered along with everyone. And the Berlin state paper didn't even mention the fall of the Berlin Wall in the first days following November 9, 1989. An analysis. (08.11.2019)