How the press in Eastern Europe reacted to the fall of the Berlin Wall | Culture | Arts, music and lifestyle reporting from Germany | DW | 08.11.2019 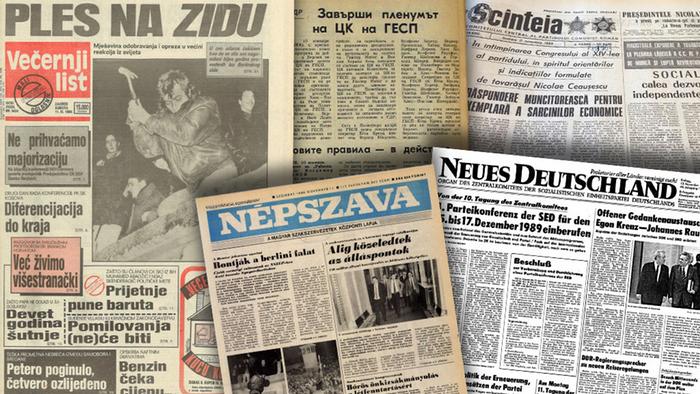 Reading the Romanian newspapers of November 11, 1989, one would think that nothing earth-shattering had happened — with the exception of the "masterly lecture by comrade Nicolae Ceausescu at the extended plenary session of the Central Committee of the Communist Party of Romania," in which the Romanian head of state and party highly praised the "brilliant program for the work and revolutionary struggle of all our people," as well as the "exemplary fulfillment of economic tasks." What had happened 1,500 km northwest of Bucharest, in divided Berlin, during those days is not even mentioned. Socialism is praised as the "way of the free, independent development of the peoples."

In Bulgaria, too, the expression of joy over the fall of the Berlin Wall was restrained: The Rabotnitschesko delo, the press organ of the Bulgarian Communist Party, only casually addressed the three-day 10th Plenary Session of the SED and listed the members of the Central Committee who had to resign for "disciplinary reasons."

While the new travel conditions are mentioned in the November 10, 1989 newspaper, the author of the text stresses, using the words of Günter Schabowski — the journalist and Politbüro spokesman who inadvertently hastened the fall of the Berlin Wall by casually mentioning the "immediate" effect of East Germany's lifting of restrictions on travel across the border to West Germany — that just because the border could now be passed, did not negate the reason for the Wall being built in the first place. The word "wall" is placed in quotation marks as if it had never existed and was a misleading term. In the jargon of the Socialist party leadership, the Berlin Wall was rather described as a "protective barrier."

A well-hidden, short opinion piece on page 4 of the newspaper Trud, the press organ of Bulgaria's trade unions, offered a visionary look at the events: "From now on, people will talk much more about the division than has been the case until now," author Dragomir Draganov predicted on November 14, 1989. Indeed: Today, 30 years after the fall of the Berlin Wall, the differences between eastern and western Germany are still being discussed, such as in relation to retirees' pensions, workers' wages and childcare spots.

Delight in Croatia and Poland

In Croatia, on the other hand, the press cheered euphorically. The mass-circulation paper Vecernji list reported on the Berlin events across four entire pages.

A photo of a man on the Wall with a hammer in his hand is titled: "As if all the charged rage of the years spent behind the Berlin Wall is packed into the blows of this hammer." The jubilation in Berlin is described as "carnival-like conditions." In a slightly sarcastic tone, Vecernji list quotes the former Head of State Erich Honecker, who had said at the beginning of that year that the Wall would still be standing 100 years from later. 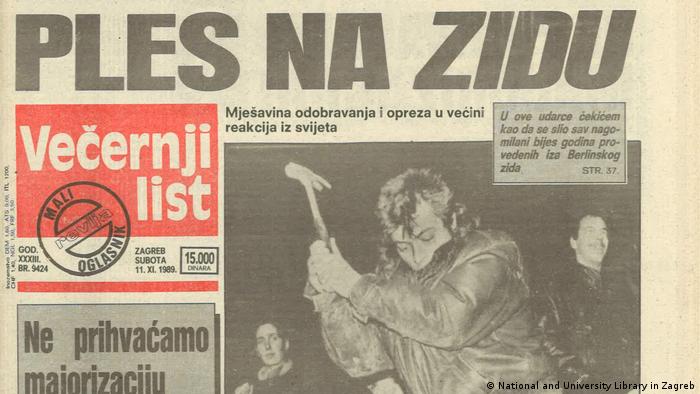 Hammering down the Wall: Croatian paper from November 11, 1989

Another article in the same issue claimed that the Kremlin had already known about the events in advance since Egon Krenz, Erich Honecker's successor and last communist leader of East Germany during the final months of 1989, had met with Mikhail Gorbachev in Moscow at the beginning of November and surely had informed him of the plans. The Croatian newspaper in its November 10, 1989 issue did not presume that there had been a spontaneous, unforeseeable turn of political events.

Poland's Gazeta Wyborcza, in its November 10, 1989 issue, announced in its cover story "Europe without the Wall": "No one knows what the consequences of the actual abolition of the Berlin Wall will be. Nevertheless, something irreversible has already happened: The shots aimed at people have stopped. In Berlin, in the heart of Europe, in the conflict of freedom vs. barbed wire, freedom has prevailed."

"The border guards merely watched on as several people climbed the Wall and sat down on the top, the Wall where previously numerous people were shot each year while attempting to flee," the Hungarian newspaper Nepszava described the events in the divided city. "Berlin is celebrating," wrote another Hungarian paper, the Nepszabadsag, calling the Wall a "symbol of the past" in its piece about the atmosphere in Berlin during that time. 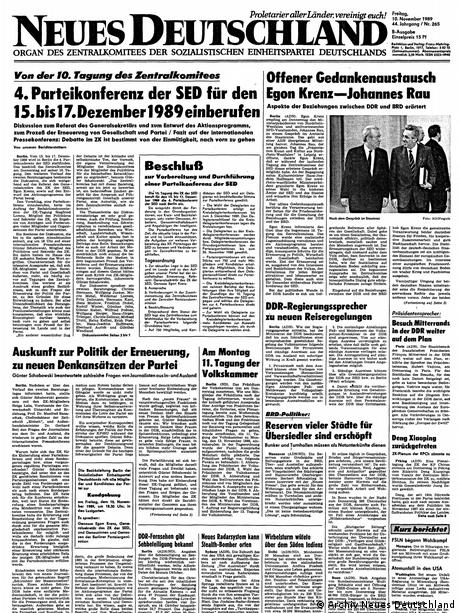 No mention of a Wall breaking open here...

On November 10, 1989, it rather focused on the meeting between Johannes Rau, then Prime Minister of North Rhine-Westphalia and Deputy Chairman of the SPD, and Egon Krenz, in which the SED Secretary General informed his West German colleagues about the "consistent steps for renewal in politics, business and society." The aim was renewal, based on the interests and needs of the people, and to make socialism more attractive and worthwhile for every citizen.

The newspaper further quoted a speech by the spokesman of the Soviet Foreign Ministry, Gennady Gerasimov, that the border had thus not disappeared, even if some Western commentators wanted to give that impression — recalling the words of Egon Krenz that the GDR's state border did not serve to prevent contact between people.

A day later, on November 11, the paper printed merely a small photo with the title, "A lot traffic at the border crossing points," and claimed that crowds' cheers at one Berlin checkpoint were in support to SED leader Egon Krenz.

The people on the street who were interviewed underlined the positive aspects of their life in the Communist country: One East German visiting West Berlin was quoted as saying, "The streets don't look any different than in [East Berlin district] Prenzlauer Berg. Sure, the shops are more colorful, and the selection is much bigger. But at home, on the other side, I have my work, a nice apartment, a kindergarten spot for Nicole."

The press in the Soviet Union reported extensively about the events in Berlin. The newspaper Izvestia wrote as early as November 10, 1989 about the "dramatic days" in the GDR. Egon Krenz's speech about the renewal and easing of travel restrictions is reported on in detail.

The newspaper Sowjetskaja Rossija raised doubt about West German Chancellor Helmut Kohl's plans. The newspaper wrote on page 20 that there was no lack of plans in West Germany, quoting the magazine Stern, according to which rumors had arisen that "concrete measures for unity in the first years of the next century" had already been taken. But that was "journalistic fantasy," the author of the article wrote. In addition, Kohl's 10-point plan violated the Helsinki Accords, which guaranteed the inviolability of frontiers, the article stressed.

An interview with Hans Modrow, the last prime minister of communist East Germany, is also printed, which evokes economic renewal. In addition, the importance of the GDR's system was stressed, and that conciliation between the two states was not on the agenda.

Sources and support in research:

Research and translations from the Hungarian: Gabriella Balassa

Translations from the Romanian: Alexandra Scherle

The Berlin Wall fell in 1989 and after years of division, the people of East and West Germany were reunited. Thirty years later, many of their stories have faded. The memorial on Bernauer Strasse recounts their fates. (31.10.2019)

A tunnel underneath the Berlin Wall has opened to the public for the first time amid celebrations to mark the 30th anniversary of the fall of the wall. The tunnel was built to help East Germans escape to the West. (07.11.2019)

The division of Berlin until the fall of the Wall in 1989 meant that many things in the city were doubled: two zoos, two television towers, two main avenues. To the delight of tourists, they are still there today! (06.11.2019)

What remains of the Berlin Wall?

How the fall of the Wall changed Berlin's cityscape