From the throne to jail: Erich Honecker was hunted, homeless, exiled and jailed in his last years of life. The former East German strongman fell with his state. He was arrested on July 29,1992. 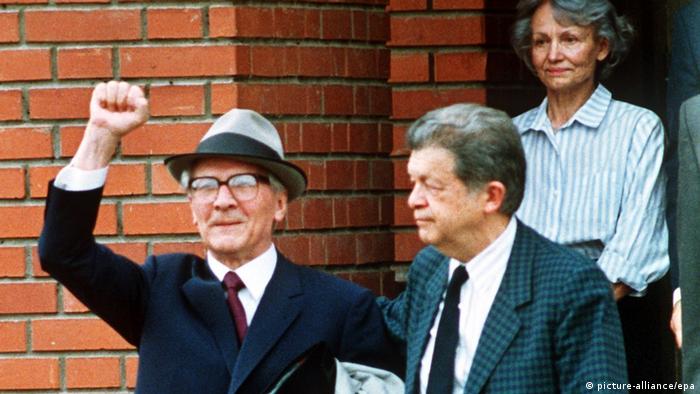 Erich Honecker became a communist at 10 years old. At that tender age, and under the influence of his socialist father, he joined the communist youth organization "Young Spartacus League" in 1922. From 1929 onward he was a member of the Communist Party of Germany (KPD). When Adolf Hitler began persecuting communists, Honecker took on the alias Martin Tjaden, which he used while working and organizing underground communist youth meetings. But the alias was not enough to protect him from the Gestapo, the secret police of the National Socialist government. They arrested him on December 4, 1935, and two years later a Nazi court sentenced him to 10 years in prison for the charge of preparing to commit treason. It was not to be the last time that Honecker would be jailed in the course of his tumultuous life.

In power until the wall came down

After the end of the Second World War Honecker enjoyed a long period of great power. He began his political career in the German Democratic Republic (GDR), eventually rising through the ranks of its one-party hierarchy to become the general secretary of East Germany's Socialist Unity Party (SED) in 1971, and eventually take leadership of the entire country by becoming the chairman of the State Council of the GDR in 1976. He held those powerful positions until the fall of the Berlin Wall in November of 1989. Yet, because he had failed to enact the East Bloc reform programs that began as Cold War tensions eased in the late 1980s, his regime eroded. Honecker was forced to resign in October 1989, the wall fell on November 9 and one year later Germany was reunified. Sick - Honecker had kidney cancer - and with nowhere to stay, the ex-ruler and his wife Margot found refuge with a Protestant pastor and his family in Brandenburg. 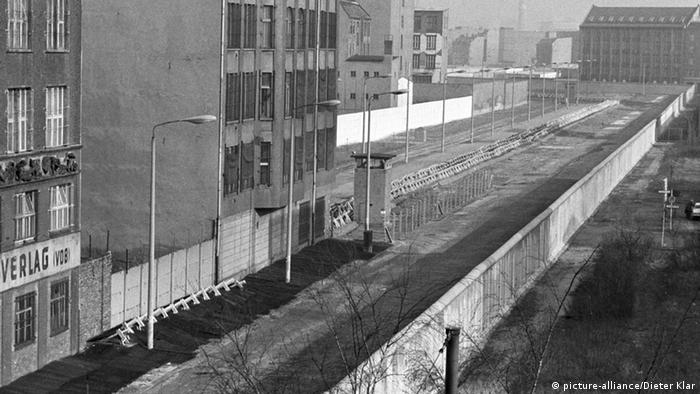 It was a peculiar situation considering the degree to which churches were persecuted in the GDR and the fact that the children of pastors were not allowed to attend secondary school there. In the secluded protection of the church, the Honeckers followed events in their former country on television, until German reunification was finally announced on October 3, 1990. With that, East Germany became a relic of history. Honecker's former state joined the West German Federal Republic (FRG) and was thus subject to its laws. Just a few weeks later, on November 30, 1990, the Ministry of Justice issued an arrest warrant for Honecker's role in killings that had taken place under his watch at the inner-German border.

To avoid trial, Honecker and his wife Margot secretly fled to a Soviet military airstrip from which they were flown to Moscow. But the German government wanted to see him held accountable for his crimes. The government put pressure on Russia to extradite Honecker, so the couple then fled to the Chilean embassy in Moscow. The Chileans were in effect returning a favor, for the ambassador there, Clodomiro Almeyda, had himself enjoyed political exile in East Germany during the years of the Pinochet dictatorship. But the government of newly-unified Germany still wouldn't let go, eventually securing Honecker's extradition, thus ensuring he would stand trial for his crimes. His wife Margot fled to Chile, where she was welcomed by the couple's daughter, Sonja.

Behind bars once again

Erich Honecker emerged from the Chilean embassy on July 29, 1992 with his fist raised in a communist salute. He was then flown to Berlin where he was immediately arrested upon arrival. He was jeered with chants of "Murderer! Murderer!" by onlookers as he was taken to Berlin's Moabit prison. 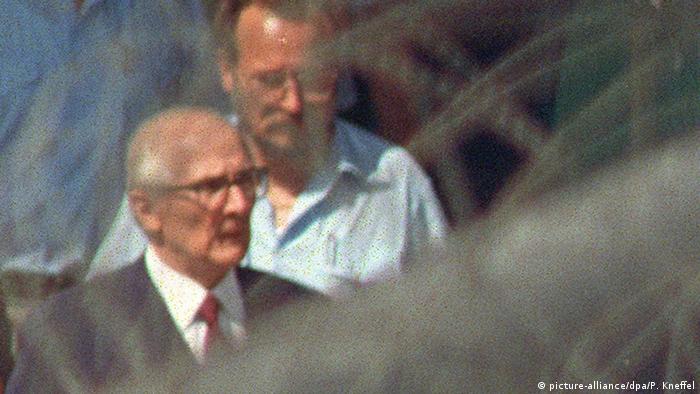 Honecker was jeered with chants of 'Murderer! Murderer!' when he arrived back in Berlin

The first weeks of his captivity were consumed with lengthy discussions about his physical state. In Russia, doctors had detected a kidney tumor while doing an ultrasound examination, then surprisingly, just three weeks later they said that he did not have cancer. That reassessment was what made Honecker's extradition possible. The former leader was then quickly labeled an "imaginary invalid" and a faker. In fact, his tumor had metastasized, as German doctors soon discovered.

Nevertheless, the trial of Eric Honecker and four codefendants began at the Berlin regional court on November 12, 1992. The men were charged with 68 counts of manslaughter and attempted manslaughter at the inner-German border, which Honecker had fashioned as an impassable armed and guarded "death strip."

As if the defendant still had a wall of his own in his head, one that divided East and West, good and bad, Honecker the defendant became Honecker the accuser. He leveled harsh criticism of the German justice system as he stood before the Berlin court: "The constitutional state of the FRG is not a state of rights, but a right-wing state." He ended his statement by saying, "Do what you can't keep from doing." 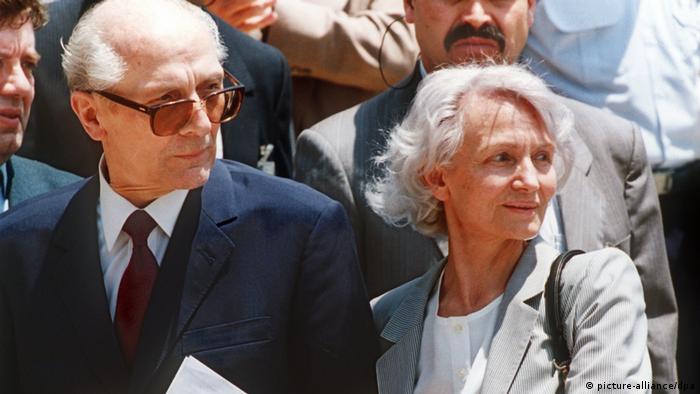 But hearings never began, as affidavits assessing the state of Honecker's health were repeatedly introduced. A representative of one of the co-plaintiffs in the case put forth the theory that Honecker had not been suffering from cancer but rather a fox tapeworm. He went on to propose that the man at the dock was not even Erich Honecker but a body double.

When one of the judges, Hansgeorg Bräutigam, asked Honecker for an autograph the trial went entirely off the rails. Judge Bräutigam was forced to recuse himself due to accusations of bias, and a few days later, on January 12, 1993, the court ended the trial altogether. It was said that Honecker was too ill to stand trial and that to force him to do so would be a violation of his human rights. One of the most spectacular trials in German postwar history thus ended without a verdict.

The very next day, Honecker boarded a plane that took him to his family, who awaited him in Chile. There he spent that last year of his life with his wife Margot and their daughter Sonja's family. Honecker received a small pension from the Federal Republic as well as donations provided out of "international solidarity." On May 29, 1994, Erich Honecker, once the most powerful man in East Germany, died in exile in Santiago.