German rock star Udo Lindenberg is receiving the Order of Merit of the Federal Republic of Germany a day ahead of German Unity Day, celebrated on October 3, alongside 24 other people including astronaut Alexander Gerst.

True fans of the veteran rocker already know that he has also been painting and drawing his entire life. The rocker expresses his commitment to peace and freedom not only through his songs and statements, but also in his drawings.

They are now on show at an exhibition in Leipzig: "Nuances" presents Udo Lindenberg's political art, which also reflects his interest for the people of the former East German state, 30 years after the fall of the Berlin Wall.

Udo Lindenberg sees an additional symbolic power in the fact that the exhibition is held in Leipzig, the city where political protests known as the Monday demonstrations began in September 1989: "No one knew: Would it stay peaceful or would they send in the tanks and the guns? That was a real risk, so this is my homage to the pioneers, to the women and men who first took to the streets," the rocker told DW.

Along with Lindenberg's paintings, the exhibition includes a golden Trabant car, photos from his career as well as painted-over files the Stasi, the GDR's official state security service, kept on him. 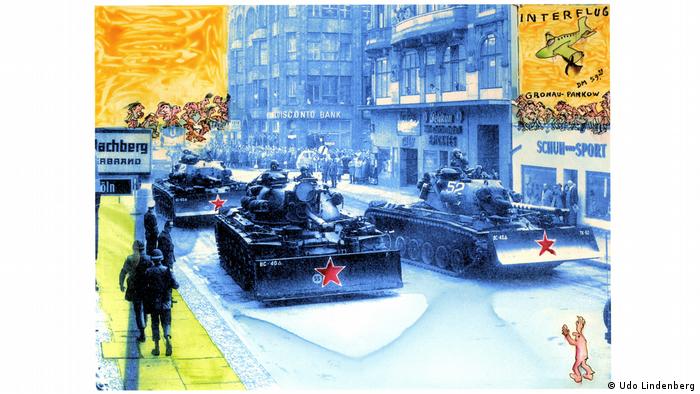 Germany's division regularly appeared in Lindenberg's songs, for example in "Mädchen aus Ostberlin" (Girl from East Berlin, 1973), which is about a guy who unwillingly has to leave a girl he's just met in East Berlin. The singer told DW that the song was based on his own experience meeting "a very friendly, charming person — my first girl from East Berlin." At the end of the day, he was confronted to the fact that he had to return to the west before the midnight curfew.

In "Rock'n' Roll Arena Jena" from 1975, Lindenberg sings how he'd like to perform throughout East Germany, where he knew that he "had many friends."

That only happened after the fall of the Wall. There was one exception, but it didn't quite turn out as planned…

Read more: 8 reasons why Udo Lindenberg is Germany's undisputed king of rock at 70

Udo Lindenberg had been trying to get the authorization to perform in East Germany since the mid-1970s, but GDR authorities would not allow him to play. Even though he had many fans, his songs were forbidden in discos and on the radio. Even wearing fan merchandise publicly was seen as a sign of protest and proscribed.

The Stasi had identified Udo Lindenberg and his Panikorchester (Panic Orchestra) as troublemakers. The first files on the rocker date from the year 1976. They reveal that officials viewed the West German musician as a "mediocre pop singer" with an "expressly anarchistic" style. Another entry states: "His appearance is characterized by typical, almost standardized clothing (felt hat, rubber trousers, half-boots and mostly black T-shirts) and by a deliberately rowdy and casual behavior." 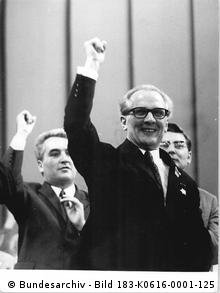 East German functionaries definitely didn't want to give the stage to such a subversive personality.

Then in 1983, Lindenberg reacted to the performance ban with a song called "Sonderzug nach Pankow" (Special Train to Pankow), which appealed ironically to East Germany's leader, Erich Honecker: "Hey, honey, I'll sing for little money in the Palace of the Republic, if you let me." The lyrics depict the politician as "actually being a rocker" who "secretly likes to put on his leather jacket, lock himself up in the loo and listen to West radio."

It outraged GDR officials. The state security noted in the Lindenberg file: "The song represents a defamation of the Secretary General of the SED [Erich Honecker] and the cultural policy of the state." The song was declared "offensive" and officially forbidden.

Nevertheless, it could be heard in discos throughout East Germany. Spies arrested DJs who played the single. Two young DJs from Cottbus even received five-month prison sentences.

Invited as a peace activist

Meanwhile, however, a global political crisis was escalating. The NATO Double-Track Decision had led Western powers to deploy nuclear weapons in Western Europe, and it was only a matter of time before West Germany would also begin to arm.

In that context of uncertainty, the East German leadership felt that it would be good to invite peace activists from the West. Udo Lindenberg was invited to perform — and not only in the East Berlin Palace of the Republic, but in other GDR cities as well. 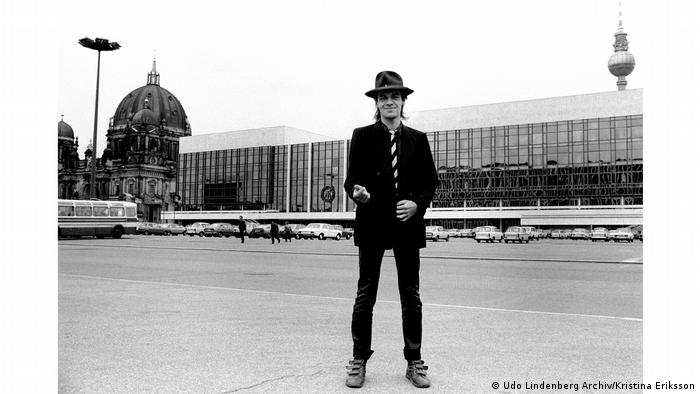 Udo Lindenberg in front of the Palace of the Republic

The show took place on October 25, 1983. It was a prestigious event, which was also later broadcast unedited on TV. Lindenberg did his job: "Tonight we play for peace and, for the first time, for all people in East Germany, for you here with us and for you watching us on television." He then exclaimed: "Get rid of your junk weapons, West and East Germany! We don't want to see a single missile anywhere!"

State officials were taken aback by the public's strong reaction to Udo Lindenberg's statements. His Stasi report states: "Udo Lindenberg's performance sparked more enthusiasm than expected from state officials; if he had extended his performance by just one song, it would probably have been impossible to discipline the audience afterwards, despite previous instructions."

Consequently, Lindenberg's tour through the GDR was cancelled. Authorities wanted to avoid having him incite the youth to rebel against the state.

But the rocker didn't give up. He kept trying to obtain a performance permit for East Germany, even contacting Erich Honecker personally. In 1987, he gave the East German leader a leather jacket. In return, the State Council Chairman gave the rocker a shawm, a wind instrument Honecker had wanted to play in his youth. Lindenberg with Honecker's shawm, which is also on show at the "Nuances" exhibition

Shortly afterwards, Honecker visited the West German state of Saarland. And Udo Lindenberg was there to greet him with an electric guitar inscribed with "Gitarren statt Knarren" (guitars instead of rifles), offered as "a symbol of our common peace efforts," said Lindenberg, playing up to the politician.

Honecker's reaction: "Guitars instead of rifles, that's perfectly right. All the best for the future and see you in the German Democratic Republic."

But despite the direct connection with Erich Honecker, they didn't meet again in East Germany. The GDR cultural authorities kept a hard stance: No entry for Udo Lindenberg. 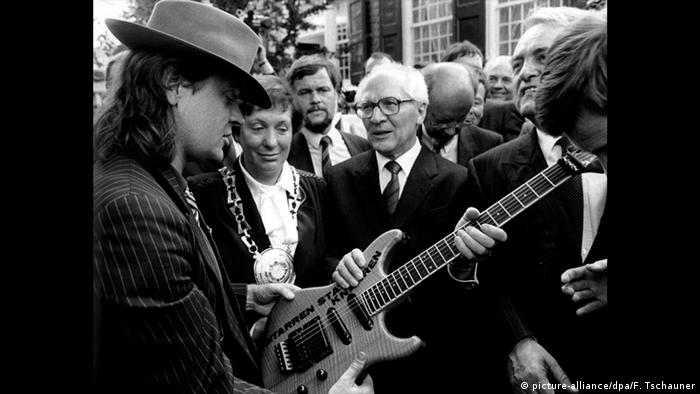 The guitar gifted to Honecker "wasn't quite cheap," Lindenberg says

The night the Berlin Wall fell on November 9, Lindenberg immediately flew to Berlin: "I camouflaged myself a bit; I didn't wear my usual hat but other hats and wigs and a painted beard and all the tralala, and spent days in the middle of the action on the streets, once in a while letting fans recognize me. They couldn't believe it: Is that the real Udo or a double or what?" It was the best party in his life, he told DW.

It was not until 1990, after the fall of the Berlin Wall, that Udo Lindenberg could fulfill his dream of touring East Germany and singing for all his fans.

The exhibition "Udo Lindenberg. Nuances" can be seen at the Museum der bildenden Künste in Leipzig until November 24, 2019.

Udo Lindenberg: 'As entertainers, we have to take a political stand'

As the German rock star Udo Lindenberg turns 70, DW met him during a rehearsal for his upcoming tour, which kicks off on May 20. He discussed Germany's values - and how he perceives himself. (17.05.2016)

To celebrate his 70th birthday, Udo Lindenberg's hometown Gronau has bestowed on him its highest honor: honorary citizenship. (27.07.2016)

Statue of German rocker Udo Lindenberg stolen — and no one notices

Lindenberg is a cult figure in Germany, and the living legend has a bronze effigy in his hometown. Cracked, temporarily replaced and now stolen, "Gronau's statue of liberty" has faced many challenges within three years. (05.07.2018)