Rio: Carnival dancers with a message

This is protest in Brazil: A samba school has pitted itself against Big Agriculture to bring attention to the country's native people during Carnival. 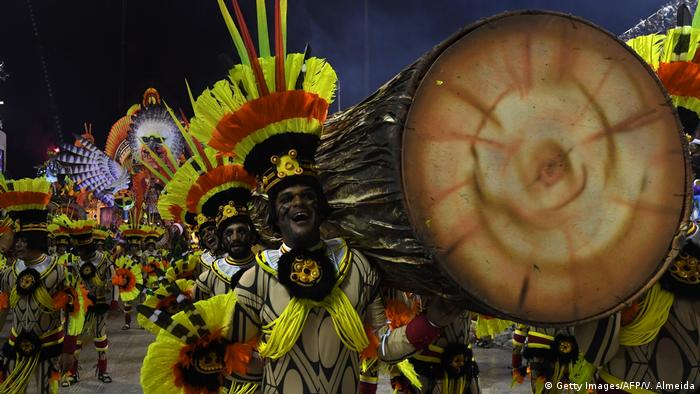 The Carnival song brings a soothing message to the mistreated soul of Brazil's natives: "I am the forgotten son of the world. My heart is red in pain. I am the last immortal fighter – the true owner of this land."

With its hit Carnival performance, "Xingu: A Cry from the Jungle," the Imperatriz Leopoldinense samba school not only cuts deep into the Brazilian heart, but also takes on a political dimension.

Imperatriz Leopoldinense is the first samba school to directly represent the rights of indigenous people - and in doing so, goes up against the farming industry. The song's name derives from Xingu, an area of Brazil's Amazon protected for the indigenous tribes living there and a point of contention between them and the country's major landowners. As agriculture expands for soy, rice and wheat production, tribes increasingly lose their native lands.

The carnival-themed protest captivated the public during the annual festival at Rio's Sambadrome late Sunday night. "One of a kind and touching," said Carnival critic Thiago Barros. "Imperatriz hit it right on the nose."

"Xingu: A Cry from the Jungle" was already causing a stir, in particular with representatives of the agriculture sector who feel it has been shown in a poor light.

"The issue has caused trouble for producers because it is based on a false impression of the sector," the Association of Brazilian Farmers (SRB) said in a statement. 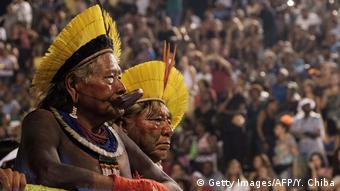 "False," say farmers regarding the presumed extensive use of chemical pesticides. The samba school Carnival participants agreed to change a sign they had made following a visit by association representatives: "The landlords and their pesticides" became the "abuse of pesticides."

Brazil's indigenous people are glad that "Xingu" has reawakened debate about the destruction of the Amazon, which is their home. "It's good that white people remember us," tribal chief Raoni Metuktire told Brazilian media.

The leader of the indigenous Kayapo traveled to Rio with 16 other natives to be part of the Carnival parade. He sat in the last float and sang with the samba school. "Carnival is a good opportunity to shed light on destruction threatening our reserve and demand respect."

Imperatriz presented a unique local history for the 70,000 Sambadrome onlookers. For many Brazilians, the story of Xingu national park, established 55 years ago as the largest protected area for indigenous Amazon tribes, is largely unknown. 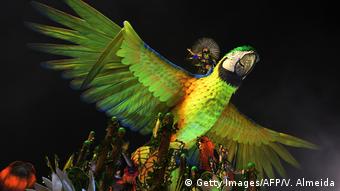 The school's performance also denounces a controversial hydroelectric dam being built on the Xingu River. It will be the fourth largest in the world upon completion in 2019 and may flood thousands of square kilometers of rainforest and farmland. Between 20,000 to 40,000 residents may have to be resettled.

At the Sambadrome, the Imperatriz school called the dam a "beautiful monster" and it leaves nothing to the imagination: "A beautiful monster steals the children from the land, devours forests and dries up rivers, greed has destroyed so much wealth."