Russian President Vladimir Putin and the IOC have been heavily criticized for human rights violations related to the Winter Olympics in Sochi. How much responsibility does the IOC bear? 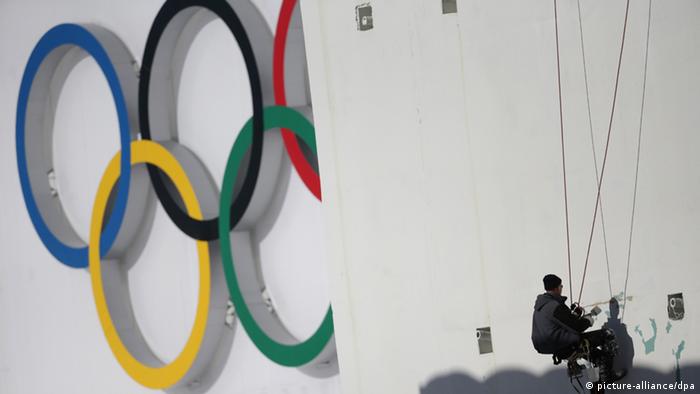 Beginning on Saturday, the world will tune in to watch athletes from around the globe compete for medals and records in the Black Sea resort of Sochi. While doping has already become a subject of discussion, with a record number of tests being conducted during the games, critics want to make sure that alleged human rights abuses by the Russian government remain on the agenda.

The Sochi Winter Olympics have been labeled as "the games of superlatives." At least the record sum of $37.5 billion (27 billion euros) for the construction of the sports facilities, the Olympic Village, highways and hotels make the games the most expensive in history.

The workers on the Olympic construction sites were "often exploited, housed in bad accommodations, had no contracts and did not receive appropriate salaries," said Wolfgang Büttner from Human Rights Watch (HRW). At least 2,000 families have been forcefully relocated to make way for the Olympic sports facilities and most of them were not compensated. Attempts to criticize these abuses were also met with a harsh reaction from Moscow.

"Again and again there were arrests and intimidations of critics who condemned building projects and related human rights violations," said Büttner about the arbitrariness of the authorities, which HRW has documented since 2009. 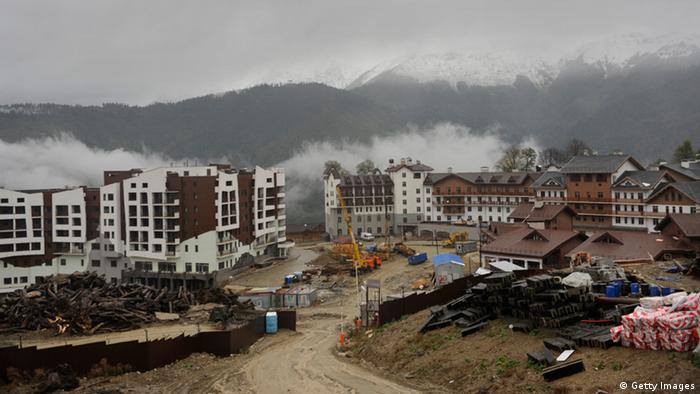 Many of the construction workers have not been paid

The 2008 Summer Olympic Games in Beijing were also labeled the "games of superlatives." The spectacular opening and closing ceremonies, perfectly organized competitions, and the most modern Olympic buildings made a lasting impression. But there was also criticism.

China was condemned for imprisoning critics, demolishing residential areas, exploiting construction workers and censoring media. In retrospect, it looks like a blueprint for the Winter Olympic Games in Sochi.

"Of course Beijing was a bad example of what could happen if you award Sochi with the Olympic Games," said Wolfgang Büttner.

"Everything that's happening there - the destruction of the environment, the security situation - are things which the people who awarded Sochi with the games knew about," said Strässer.

When the Winter Games had been awarded to Sochi in 2007, the debate about human rights violations in Beijing was already in full swing.

"In connection with the Olympic Games in China, the International Olympic Committee (IOC) always emphasized that the human rights situation would improve due to the sports event - that didn't happen," said Janna Sauerteig, Amnesty International's Russia expert. "Right now, we can't confirm the IOC's argument that the human rights situation in Russia will improve just because of the Olympic Games."

Blind eye to the reality? 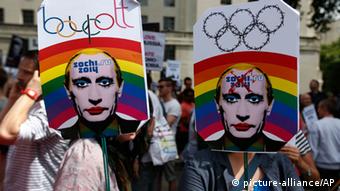 At the opening of the general assembly in Sochi three days ahead of the games, IOC President Thomas Bach vehemently spoke out against any kind of discrimination and built a golden bridge for the Russian government.

"We are very satisfied with the assurance of the Russian government that it will respect the Olympic Charter during the Games," said Bach, calling on world powers to avoid criticizing Russia at the expense of the athletes.

Human rights activists are against a boycott of the Olympic Games. Instead, they focus on the IOC.

"We mainly criticize the IOC for counting on the promises of the Russian authorities when it's not clear that these promises will be kept," said Büttner from HRW, accusing the IOC of reacting too late.

"The human rights abuses related to the construction of the Olympic sites have been known since 2009," he said. The IOC did not respond to an interview request from DW related to the accusations. 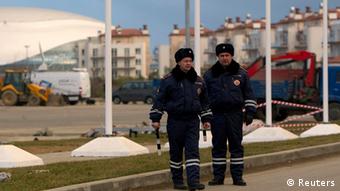 Russia has tightened security in and around Sochi

For Willi Lemke, the UN Special Advisor on Sport, the debate "overloads the Olympic movement." Political debates should take place at the UN General Assembly and the G-20 summit, he said. Lemke warns that if the requirements concerning human rights and environmental standards are broadly drawn then "there won't be a city or a country which is able to organize Olympic Games." In an interview with DW, he implied that there are double standards in the debate.

"Do you think that major sporting events could be held in the US in good conscience, given the death penalty in 37 states or the human rights abuses in Guantánamo?" Lemke said, adding that the US is the undisputed "number one sport nation."

Meanwhile, the chorus of critics becomes louder, bigger and more notable. More than 200 writers, among them the literature Nobel laureates Günter Grass, Elfriede Jelinek and Orhan Pamuk, published an open letter in which they asked Russia to protect the freedom of opinion. The British newspaper The Guardian printed the appeal. The group also decried the law against gay "propaganda" in Russia.

Wolfgang Büttner from HRW hopes for a change of awareness due to the massive pressure.

The enormous infrastructure upgrade for the Winter Games has had a major impact on the environment. Some say the region may never recover from the damage that has been done. (07.02.2014)

The biggest and most expensive Winter Olympics ever

The Russian organizers of the Sochi Olympics have set out to impress the world with the biggest-ever Winter Games. Critics have spoken of "Putin’s Games" with megalomaniacal dimensions. (06.02.2014)

Security jitters ahead of Sochi games