Berlin zoologists have succeeded in producing living rhinoceros embryos from stored sperm of the northern white rhinoceros. The breakthrough nourishes hope of bringing the nearly extinct species back to life. 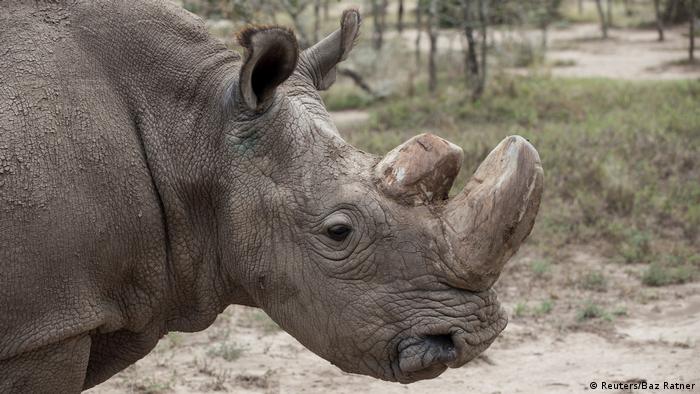 When Sudan, the last northern white rhino bull, died in Kenya in March 2018, that left alive only two females of the subspecies once common in Central and East Africa.

Both are descendants of Sudan and live in Kenya, and were considered infertile. But now, new hope is emerging that extinction of the species can still be prevented.

A team led by veterinarian Thomas Hildebrandt from the Leibniz Institute for Zoo and Wildlife Research (IZW) in Berlin has succeeded in creating living embryos in the laboratory from frozen sperm of the northern white rhinoceros and egg cells from the southern white rhinoceros. It's the most closely related subspecies, with more than 20,000 southern rhinos living in the wild.

Poaching has driven the northern white rhino to the brink of extinction.

Although such hybrid embryos are not pure northern white rhinoceros, the researchers were able to show for the first time that the creation of such embryos is possible. The researchers succeeded in the experiment about 20 times.

Read more: Can IVF save the last white rhinos?

Scientists plan to take egg cells from the still living northern rhinoceros females in autumn of this year, and to fertilize them with stored sperm from the same species.

They then intend to implant the oocytes into fertile southern rhinoceros females in early 2019.

The researchers had to contend with poor-quality sperm. Nevertheless, fertilization was successful by directly injecting a sperm cell into an egg cell, a process known as "intracytoplasmic sperm injection" (ICSI). The method is also used in human reproductive medicine.

The Leibniz Institute researchers were supported by Italian company Avantea, which specializes in fertilization of cattle and horses.

The scientists published their results in the journal Nature Communications. 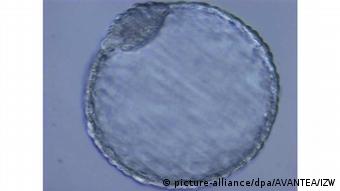 An in vitro rhino embryo

Even if healthy rhinoceros calves can be produced, whether the northern white rhino can be saved in the long term remains unclear.

Because the sperm comes from a few rhinoceros bulls, limited genetic diversity could endanger the health of a newly bred northern white rhino population. Due to the smaller gene pool, such inbreeding typically leads to higher rates of recessive disorders, translating into higher death rates and poorer overall health.

To try and get around this problem, scientists are working in parallel on stem cell technology to cultivate sperm and oocytes from preserved rhinoceros body cells.

Yet even with stem cell technology, success is by no means certain. Like in cloning experiments, miscarriages and deaths could occur.

A comparable attempt involving the breeding of the Iberian ibex, which died out in 2000, failed. An animal died of a lung malformation only a few minutes after birth.

Swipe right to save the rhino

He's 43 years old, six feet tall and pretty wrinkly: The world's last remaining male northern white rhino has joined the dating app Tinder in a last-ditch bid to save his species from extinction. (26.05.2017)