German media have reported that the anti-government group has grown by 56 percent to 15,600 members. Security services are concerned that propaganda about a 'Reichsbürger army' will inspire attacks. 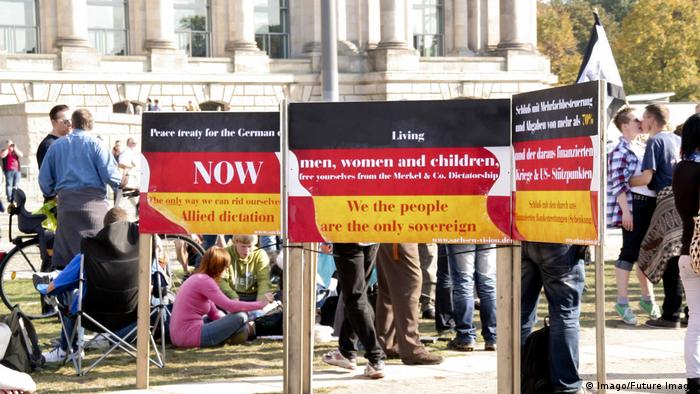 Germany's most idiosyncratic far-right movement has increased its membership by about 56 percent in a single year, local media reported on Friday. The Reichsbürger group is also trying to build an army and preparing for a "day of reckoning," according to news magazine Focus.

Reichsbürger is used as a label for a loosely connected group of Germans who believe that the 1871 borders of the German empire are still in effect and that all of the country's governments since (and including) the Nazis have been illegitimate, many also subscribe to anti-Semitic ideologies.

They believe that the current Federal Republic of Germany is a puppet government controlled by the Allied powers of World War II.

Usually dismissed as a disparate association of ideological radicals, the Reichsbürger have increasingly been in the headlines after a series of violent incidents in the past two years, including the murder of a policeman in the Bavarian town of Georgensgmünd.

After putting in information requests to Germany's domestic security agencies, Focus reported that the number of Reichsbürger adherents had grown to 15,600 by January – up more than 50 percent from the same time last year.

The biggest number of supporters resides in Bavaria, which has about 3,500 Reichsbürger members.

"They have begun preparing themselves for Day X," Focus writes, referring to an imagined day of reckoning or uprising against the German government. They are also apparently trying to form an army.

While the organization's disjointed nature makes the threat of significant violence relatively low, security services are worried that the Reichsbürger's militia propaganda will inspire lone-wolf attacks and increase illegal weapons trafficking. More than 1,000 Reichsbürger members have one or more legal weapons licenses.

Adrian U. was once crowned the most handsome man in Germany. Now he faces charges of attempting to shoot dead a policeman. The defendant is believed to a member of the militant far-right Reichsbürger movement. (10.10.2017)

More and more Reichsbürger and neo-Nazis are getting legal access to firearms at shooting clubs, according to Thuringia's state intelligence agency. The state is thought to be home to about 1,000 Reichsbürger. (04.10.2017)